DETAILS: In his book, Norman Mailer: A Double Life, Lennon presents the definitive portrait of one of the most important and controversial figures in American literary and cultural life in the second half of the twentieth century. As the authorized biographer Lennon knew his subject for decades and had unfettered access to Mailer’s voluminous papers, unpublished letters, family members, and acquaintances.

Lennon is Emeritus Vice President for Academic Affairs and Emeritus Professor of English at Wilkes University in Pennsylvania. In addition to being chair of the editorial board of The Mailer Review, he has written or edited several books about and with Mailer, including Norman Mailer’s Letters on An American Dream, 1963-69; Norman Mailer: Works and Days; Conversations with Norman Mailer; and Critical Essays on Norman Mailer.

He is the past president of both the Norman Mailer Society and the James Jones Literary Society and serves on the board of both organizations. From 2005-2007, he was a literary consultant to the Harry Ransom Center, University of Texas-Austin, where he assisted in the cataloguing of Mailer’s papers, and was a Fellow there in 2009. His work has appeared in The New Yorker, Paris Review, Playboy, Provincetown Arts, New York, Modern Language Studies, Chicago Tribune, and New England Review, among other publications. He lives in Westport, Massachusetts.

Lennon will conduct a book signing after the lecture. Copies of Norman Mailer: A Double Life will be available for purchase at this event.
Blake Wood at 11:42 AM No comments:
Share

Fader will present a lecture, sponsored by the UIS Engaged Citizenship Common Experience (ECCE) Speakers Series, on Wednesday, March 12 at 5:30 p.m. in UIS Brookens Auditorium, located on the lower level of Brookens Library. An exhibition reception will take place on Thursday, March 13 from 5:30-8:00 p.m. in the UIS Visual Arts Gallery, located in the Health and Science Building, room 201.

This series launched when Fader messaged men that he sought out on dating websites. For 365 days he trolled online dating and “hookup websites” looking for men who interested him.

“I looked at their profile and pre-visualized a portrait of who I thought they might be,” said Fader. “Then I contacted them and asked them out on a date.”

Fader set up dates to take place at the apartment of his soon-to-be subject, never having previously met. Upon arrival, he staged a scene, sometimes moving furniture and carefully choosing clothing for the subject to wear. He worked to stage a scene that reflected his initial impressions of that individual, as measured by profile content, screen names, and exchanges. He directed them to enact preconceived ideas of who he imagined them to be.

Following this preliminary shoot, Fader would then take his subjects out on a date. Consistently, Fader discovered that his initial impressions were not often reflective of the person he subsequently got to know on a more personal, human level.

“This allowed me to consider how I might alter my first portrait of them,” said Fader. “After our date, we collaborated on creating an image that we both felt truly represented them.”

The final product consist of the “before” and “after” portrait photographs, and Fader also provide the viewer with the dates the photos were taken, screen names, real names and cities, and selections from communications between the two individuals.

“SUP?” will open at the UIS Visual Arts Gallery on Monday, March 10 and run through Thursday, April 10. These events are free and open to the public, and are partially sponsored by the ECCE Speaker Series, the UIS LGBTQA Resource Office, The State House Inn, and the Illinois Arts Council State Agency.

The UIS Visual Arts Gallery is centrally located on the UIS campus in the Health and Science Building, room 201 (HSB 201). Gallery hours are Monday through Thursday, 11 a.m. to 6 p.m. For more information exhibition programming, please visit the UIS Visual Arts Gallery website at www.uis.edu/visualarts/gallery, or contact the gallery at 217/ 206-6506 or alach3@uis.edu.
Blake Wood at 3:44 PM No comments:
Share 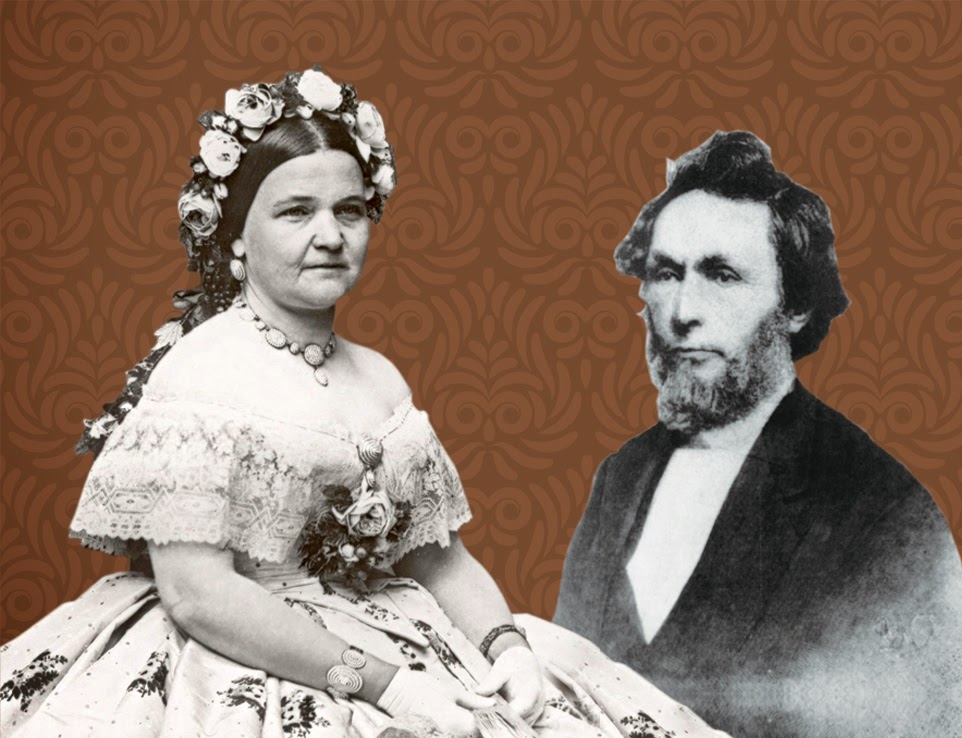 WHAT: The University of Illinois Springfield Alumni SAGE Society and Illinois State Historical Society presents “First-Person History” as part of its annual Lunch and Learn Series.

DETAILS: Imagine the opportunity of having a conversation in modern day Springfield with mid-1800s residents Mary Todd Lincoln and William Herndon. Historical interpreters Pam Brown and Brian Ellis will be “in character” as they discuss the challenge and joy of bringing historical figures to life.

Other upcoming Lunch & Learn events include “Mailer and MOOCs” on March 13 and “Selecting Great Performances” on April 24. These lunch-time programs will stimulate thinking as they build upon the university's tradition of open and intelligent dialogue.

Visit www.uiaa.org/uis to register online. For more information, contact the UI Alumni Association at UIS at 217/206-7395 or email alumni@uis.edu.
Blake Wood at 1:46 PM No comments:
Share

Students invited to "Cheeseburgers with the Chancellor" 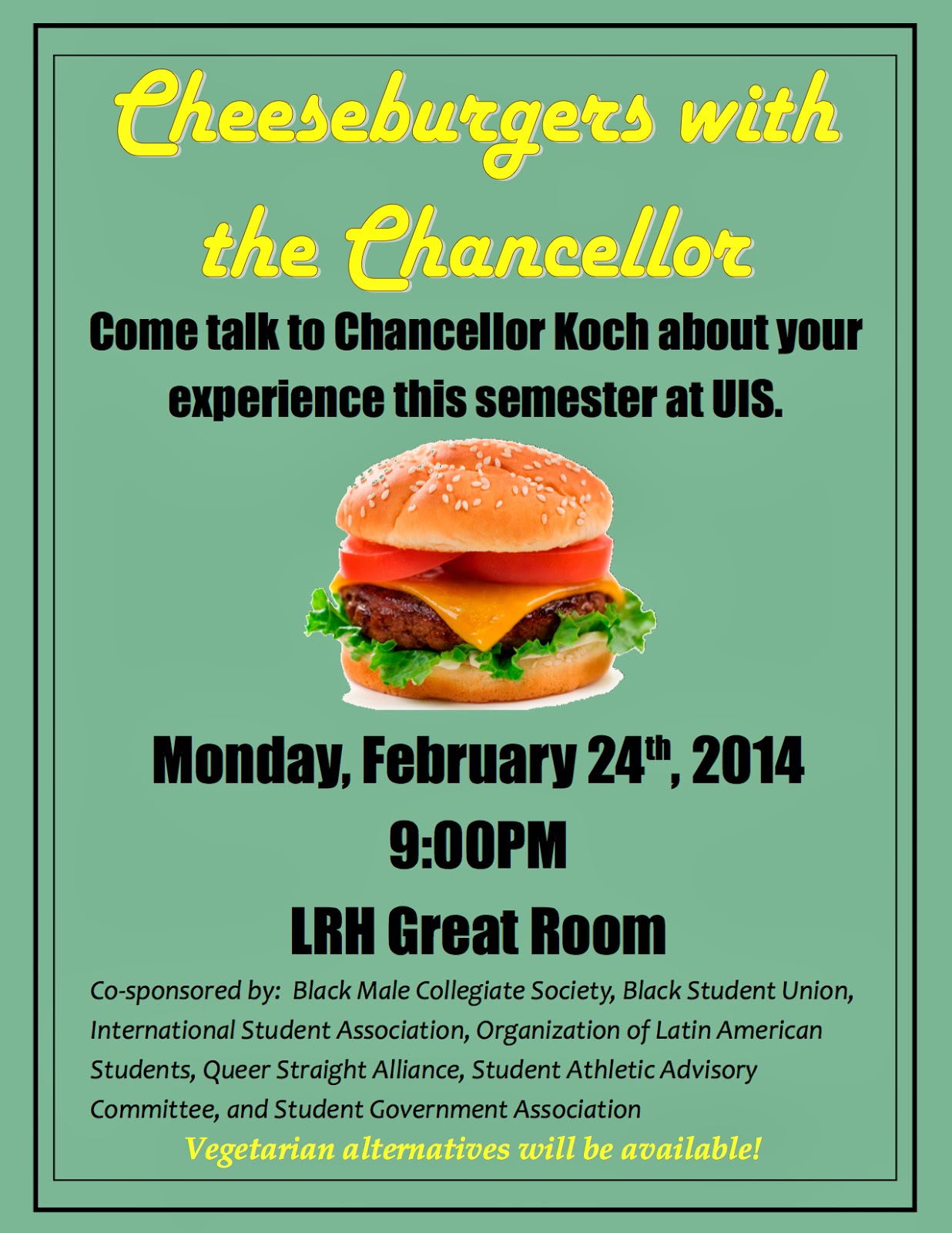 WHAT: Students are invited to talk to Chancellor Susan J. Koch about their experiences at UIS during “Cheeseburgers with the Chancellor”.

DETAILS: The forum will allow students to share their ideas and opinions with Chancellor Koch over FREE cheeseburgers in an informal setting. Vegetarian alternatives will be available.

This is the sixth forum in a series designed to create an ongoing open exchange of ideas between students and Chancellor Koch. The idea is to make the campus’ top leader more available to students in a comfortable environment.

WHAT: The career centers at the University of Illinois Springfield, Lincoln Land Community College, Robert Morris University, Benedictine University at Springfield, and ITT Technical Institute are excited to announce the 16th Annual Springfield Collegiate Career Fair. Students and alumni from the five institutions, other colleges and universities, and community members are invited to attend.

WHERE: The Recreation and Athletic Center (TRAC) on the UIS campus.

DETAILS: Beyond information about actual job openings, the fair is designed to provide an open information exchange about different organizations, hiring trends and the best routes to future opportunities. For potential employers, it is a chance to disseminate pertinent information and to develop a pool of candidates interested in future opportunities, internships and summer openings as well as permanent employment.

Representatives from over 100 area employers are expected to be on hand. The event has an average attendance of more than 400 students and alumni.

Information for students, alumni and others: Pre-registration is not required, business-casual attire is required (NO jeans), and participants should bring copies of their resumes to the fair.

Information for employers: Advance registration is required. Booth space will be assigned on a first-come, first-served basis. Registration is available online at www.uis.edu/careerservices.

For more information, or to register, contact the Career Development Center at 217/206-6508.

The Collegiate Career Fair is sponsored by the UIS College of Education and Human Services, Novanis, Epic, and Power Home Remodeling Group.
Blake Wood at 10:28 AM No comments:
Share
‹
›
Home
View web version