Students at the University of Illinois Springfield ended Springfest 2016, a week-long event featuring a variety of fun and educational competitions, with the annual mud tug-of-war on April 23.

Springfest is one of the longest running and most popular traditions at UIS. Springfest challenges include a scavenger hunt, trivia night, flag & chant competition, and sports day. 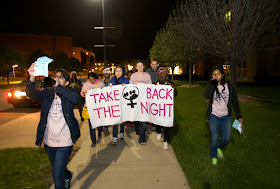 WHAT: The University of Illinois Springfield Women's Center and Residence Life will hold the ninth annual “Take Back the Night” march and rally. The event protests rape and all forms of violence against women. This year the special Earth Day “Me-We” theme includes violence against the earth, biosphere, and all creatures.

WHERE: The candlelight march will start with a brief ceremony near the colonnade on the UIS main quad and progress towards the Student Life Building (SLB) Gym where a rally will be held. 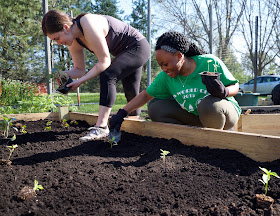 The University of Illinois Springfield will celebrate Earth Week (April 22-29, 2016) with a variety of events designed to educate students, faculty, staff, and the community about the environment. All of the events listed below are free and open to the campus community.

Earth Day Bike Ride, 10 a.m. to 2 p.m.
Meet at the North entrance to TRAC for a group ride to Chatham along a local bike trail. Bring your own bike or register to reserve a TRAC bike. Co-sponsored by the UIS Bicycle Advisory Committee. Contact Nancy Barrett with questions at nfbarret@uis.edu.

Take Back the Night March & Rally, 8:30 p.m., Colonnade
Join us for a rally and march to raise awareness of the ways that both women and the earth itself are impacted by violence. Sponsored by the Women’s Center. Contact Lynne Otterson with questions at lotte1@uis.edu.

Free Electronics Recycling Event, 10 a.m. to 2 p.m.
Bring your old computers, monitors, printers, etc. to the loading dock on the north side of Brookens Library for recycling. A list of acceptable items can be found on the BLH Computers website. Only the items that BLH Computers accept for free will be taken. UIS faculty, staff, and students are welcome to bring items from home. No university property will be accepted. For more information, contact Dave Barrows at dbarr1@uis.edu.

Earth Week Keynote, 7:30 p.m. Brookens Auditorium
The UIS Engaged Citizenship Common Experience (ECCE) Speaker Series presents “Our Turn to Lead: Paving the Way for A Resilient, Secure and Sustainable Future” starting at 7:30 p.m. in Brookens Auditorium. The Earth Week keynote address will be delivered by Roger-Mark De Souza, director of population, environmental security, and resilience for the Wilson Center. Focusing on ways we can build our resilience to natural and human-made shocks and stresses by investing in youth, women and communities, De Souza will explore how integrating concepts like women's empowerment, reproductive health, community engagement and food security can lead to better policy and actions that help us cope with adversity.

Earth Week Fair at the Colonnade, 10 a.m. to 2 p.m.
Learn about how you can get involved locally. Representatives from 15 local environmental and outdoors organizations will have tables with information, giveaways, and activities. Come early for free sandwiches and snacks from Head West. Co-sponsored by SAGE. Contact Clair Casper with questions at ccasp2@uis.edu.

A record number of students helped to kick off Springfest 2016 with the annual Scavenger Hunt on April 18, 2016. Springfest is one of the longest running student traditions on campus, which started in 1992.

Scavenger Hunt participants were given a surprise list of over 200 items to collect during a one-hour period. Points were awarded based on the number of total items collected.

Students were not allowed to use cars, bikes, or other transportation and had to collect all of the items on campus.
Blake Wood at 2:16 PM No comments:
Share

WHAT: The Illinois Innocence Project, based at the University of Illinois Springfield, will celebrate its 15th anniversary during the 9th annual Defenders of the Innocent event. Since its founding in 2001, the Project has helped to exonerate nine wrongfully convicted individuals.

Bloodsworth was convicted and sentenced to die in Maryland’s gas chamber for the 1984 rape and murder of a nine-year-old girl. In 1992, he pushed to have the evidence against him tested for DNA. Testing proved that evidence from the crime scene did not match Bloodsworth’s DNA profile. He was released from prison on June 28, 1993, and pardoned by Maryland’s governor. He is now a tireless advocate for civil rights and justice.

Campbell has always maintained his innocence for the 1998 Champaign County murder for which he was wrongly convicted, primarily due to the failure of his trial counsel to investigate and interview witnesses. Thanks to the efforts of the Illinois Innocence Project and the law firm Perkins Coie, a federal court reversed Teshome’s convictions. In January, the Champaign County State’s Attorney moved to dismiss all charges.

The Project will present Defender of the Innocent awards to Perkins Coie for its pro bono dedication to freeing Campbell and to the Illinois Times for giving the innocent a voice. The newspaper has published numerous stories about the wrongfully convicted starting with the Project’s first exoneree, Keith Harris, in 2003.

Registration for the Defenders of the Innocent event is required by April 25. For more information or to register, visit www.uis.edu/innocenceproject/ or call 217/206-6569.
Blake Wood at 10:52 AM No comments:
Share 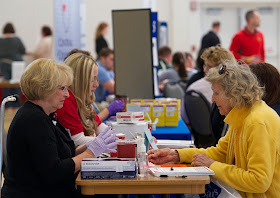 WHAT: University of Illinois Springfield Health Services and Campus Recreation presents the annual Health & Wellness Fair. The event will offer health screenings, information and door prizes. The fair is free and open to the public, students, faculty and staff.

A free colonoscopy prescreening will be offered, as well as oral cancer, prediabetes, blood pressure, and sun exposure screenings. BMI testing will also be available.

The Central Illinois Community Blood Center will also be hosting a blood drive from 10 a.m. to 3 p.m. at The Recreation and Athletic Center (TRAC) for those interested in donating or blood typing. 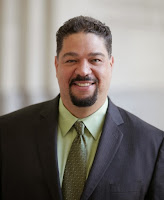 WHAT: The University of Illinois Springfield Engaged Citizenship Common Experience (ECCE) Speaker Series presents “Our Turn to Lead: Paving the Way for A Resilient, Secure and Sustainable Future”. The Earth Week keynote address will be delivered by Roger-Mark De Souza, director of population, environmental security, and resilience for the Wilson Center.

DETAILS: Focusing on ways we can build our resilience to natural and human-made shocks and stresses by investing in youth, women and communities, De Souza will explore how integrating concepts like women's empowerment, reproductive health, community engagement and food security can lead to better policy and actions that help us cope with adversity. He will present innovators who are developing new ideas and models of social change to address global and local sustainability in countries such as Ethiopia, Nepal and Tanzania. By sharing stories of some of these remarkable innovators, he will discuss the surprising ways that the broader integration of sustainability and conservation practices and policies can open the door to a resilient, secure and sustainable future.

Before joining the Wilson Center in 2013, De Souza served as vice president of research and director of the climate program at Population Action International. From 2007 to 2010, he served as the director of foundation and corporate relations at the Sierra Club. He holds graduate degrees in international relations and development policy from George Washington University and the University of the West Indies.

This event is sponsored by the Julia Henderson Fund, the World Affairs Council of Central Illinois and the UIS Sustainability Committee. For a list of other upcoming ECCE Speaker Series events and more information, visit www.uis.edu/speakerseries/. All events are free and open to the public.
Blake Wood at 1:30 PM No comments:
Share

UIS Speaker Series presents a screening and discussion of the documentary "Immigrant Nation!"

WHAT: The University of Illinois Springfield Engaged Citizenship Common Experience (ECCE) Speaker Series will present a screening of the documentary Immigrant Nation! Following the screening, a discussion will be led by Esaú Meléndez, the film’s director and producer.

DETAILS: Immigrant Nation! is a story of Elvira Arellano, a figurehead for the immigration reform movement, and her one-year asylum in a church sanctuary to avoid deportation in 2006-2007. This film humanizes the issue of immigration reform and helps people understand the struggles of undocumented individuals and the issues they face. The film won several awards in 2010 including "Best Documentary" at the Chicago and San Antonio film festivals, and continues to be relevant today as the issue of immigration reform remains on the forefront of the U.S. political scene.

Director and producer Esaú Meléndez emigrated from Mexico City where he spent most of his childhood, and presently lives in Chicago with his family. He has been involved in film and TV production for the past 10 years, working as a director, producer, cameraman and editor. He studied film & video at Columbia College in Chicago, and soon after began working with the Spanish Broadcast Network, Telemundo, and WYCC, a Chicago PBS affiliate. He has also directed award winning short films El Solo in a New City and Escucha! Meléndez has directed and produced various commercials and music videos with his production company. His passion has always been to tell stories regarding social issues that affect the Hispanic community.

This event is co-sponsored by the UIS Diversity Center, Chicano Latino Male Society and Cygnets. For a list of other upcoming ECCE Speaker Series events and more information, visit www.uis.edu/speakerseries/. All events are free and open to the public.
Blake Wood at 1:26 PM No comments:
Share

UIS Lunch & Learn Series presents "The Future of the Past: Museums" 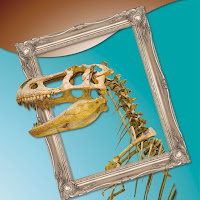 WHAT: The University of Illinois Springfield’s Office of Advancement, Alumni SAGE Society, Chancellor’s Office and the Illinois State Historical Society presents “The Future of the Past: Museums” as part of the Lunch and Learn Series.

The cost for the hot buffet lunch and program is $23/per person. Reservations are requested, as seating is limited.

Visit www.uis.edu/advancement/alumni/ to register online. For more information, contact the UIS Office of Advancement at 217/206-6058 or email advancement@uis.edu.
Blake Wood at 1:16 PM No comments:
Share

The Theatre Program at the University of Illinois Springfield presents Lisa Loomer’s poignant, funny and provocative play, Distracted, opening Friday, April 22. Six performances will be presented in the Studio Theatre, on the lower level of the Public Affairs Center at UIS, on Friday, Saturday, Sunday, April 22, 23, 24 and Thursday, Friday, Saturday, April 28, 29, 30.

All shows will begin at 7:30 p.m., except the Sunday performance (April 24), which will begin at 2 p.m. A post-show Q&A, part of the ECCE Speaker Series, will follow the April 24 performance.

In Distracted, 9-year-old Jesse can’t focus at school, can’t sit still, and can’t follow directions. Is Jesse simply a typical 9-year-old boy, or is he suffering from Attention Deficit Hyperactivity Disorder, as his teacher suspects? Jesse’s parents clash over this potential diagnosis, their marriage suffers, and Mom struggles to find a solution amid various health professionals–one of whom wants to prescribe Ritalin. Neighbors and friends all seem to have their own diagnoses–and suggested solutions–none of which seem to work for Jesse and his parents.