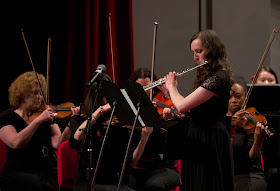 WHAT: The University of Illinois Springfield Music Program presents its Fall Showcase concert featuring performances by the UIS Chorus, UIS Chamber Orchestra and UIS Band. The performance is free and open to the public.

The UIS Chamber Orchestra, under the direction of Assistant Professor of Ethnomusicology Yona Stamatis, will lead the program with Brahms’s “Hungarian No. 5”. Other pieces include “Waltz No. 2” by Dmitri Shostakovich and “The Typewriter” by Leroy Anderson, in which Stamatis plays the typewriter with the orchestra while guest conductor Matthew Sheppard takes the baton.

Directed by Associate Professor of Ethnomusicology Sharon Graf, the UIS Chorus will perform an arrangement of “Blackbird” by John Lennon and Paul McCartney and “Psalm 50” by Ernani Aguilar. Two acapella groups will perform arrangements of “Irish Lullaby” by Alice Rose Denny and “Build Me Up Buttercup” by Tony McCauley and Michael D’Abo.

The UIS Band will end the program under the direction of Applied Music Specialist, Abigail Walsh, starting with Robery Sheldon’s “Danzas Cubans”. Other works include a programmatic work entitled “The Last Centaur” by Rossano Galante and “At Dawn They Slept (December 7, 1941)” by Jay Bocock. The concert will conclude with Henry Filmore’s "Americans We”.

Anyone who is interested in joining the UIS chorus, band or chamber orchestra may contact Abigail Walsh at 217/206-7549 or music@uis.edu.
Blake Wood at 3:14 PM No comments:
Share 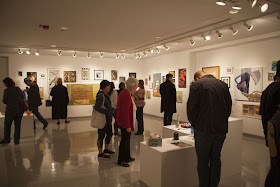 The auction offers a wide range works donated by local and regional artists. Ceramics, photography, glass, painting, drawing, mixed media works and more will have a presence at the auction. The event serves anyone hoping to acquire new, original works of art, or unique gifts as the holidays approach.

Bidding begins on November 28 and a closing reception, along with final bidding, will take place on December 1 from 5:30-7:00 p.m. in the Visual Arts Gallery, room 201 in the Health and Science Building on campus. All events are open to the public.

Works of art were donated to the silent auction by local artists affiliated with the Springfield Art Association and the SAA Collective, The Pharmacy, DEMO Project and from UIS Visual Arts Department faculty members. In addition to the local donors, artwork was donated to the auction from artists from throughout Illinois and beyond.

“This strong showing of support from our local creative community annually paves the way to success for the silent auction benefit, which serves as the sole fundraiser for the gallery each year,” said Jeff Robinson, director of the UIS Visual Arts Gallery. “The auction features an extraordinary range of work and reflects a spirit of support amongst artists that thrive in Springfield.” 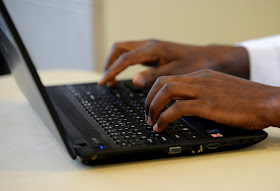 WHERE: Public Affairs Center Restaurant, located on the lower level

DETAILS: Join UIS online faculty and students as they celebrate National Distance Learning Week with a reception and recognition program.

Learn the history of how UIS has been a leader in online and blended learning degree programs for the over the past 15 years. The reception will include highlight the first two UIS online programs, Management Information Systems and Educational Leadership. Faculty will share thoughts of program growth and information for teaching and learning in an online environment.

UIS Associate Vice Chancellor for Online Learning Ray Schroeder will be honored for his distinguished accomplishments and national awards received in 2016.

Currently, 30.7% of UIS students are enrolled in online degree or certificate programs. That is a 4.3% increase from the Fall Semester 2015. UIS online students reside in 46 states within the United States, and nine foreign countries.

Additional activities for National Distance Learning Week include a faculty panel discussing the design of online courses. The faculty panel will take place on Tuesday, November 8, 2016 from Noon – 1 p.m. in the Public Affairs Center (PAC E) and those interested are invited to attend.

UIS Speaker Series presents a screening and discussion of "Black Power: The Cry of Jazz"

DETAILS: “The Cry of Jazz” is a 1959 documentary film by Ed Bland that connects jazz to African American history. It has been credited with predicting the urban riots of the 1960s and 1970s. In 2010, the film was selected for preservation in the United States National Film Registry by the Library of Congress as being “culturally, historically and aesthetically significant.” The Library of Congress calls the film “historic and fascinating,” one that “comments on racism and the appropriation of jazz by those who fail to understand its artistic and cultural origins.”

The discussion following the film will focus on how culture and artistic history have depended upon the racist appropriation of the creative work of impoverished and marginalized peoples.

The film presentation and discussion will be moderated by Associate Professor of Political Science Richard Gilman-Opalsky, Ph.D., and Kamau Kemayo, Ph.D., associate professor of African American Studies at UIS.

Gilman-Opalsky hosts a series called Political Art and the Public Sphere, which encourages everyone to consider how “political art” raises provocative social and political questions.

For a list of other upcoming ECCE Speaker Series events and more information, visit www.uis.edu/speakerseries/. All events are free and open to the public.
Blake Wood at 10:27 AM No comments:
Share
‹
›
Home
View web version