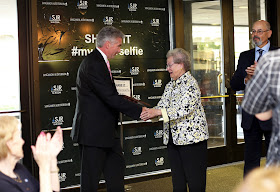 WHAT: The University of Illinois Springfield, Junior League of Springfield and the United Way of Central Illinois will present more than 40 awards to Sangamon County volunteers, non-profit organizations and businesses during the 10th annual Good as Gold Ceremony.

DETAILS: Individuals and organizations will be honored in several categories including Heart of Gold, Youth Volunteer, Organization of the Year and Distinguished Volunteer. The ceremony will also recognize UIS and/or Lincoln Land Community College faculty/staff members and students who have demonstrated an exceptional commitment to service.

A total of 21 businesses will be named to the Business Honor Roll. The honor roll recognizes businesses that have given back to our community thought direct service and charitable giving.

The 10th anniversary event will additionally honor all of the past Distinguished Volunteer Award winners and provide a special recognition to the founding members of the Good as Gold Committee.

Over the past nine years, the ceremony has recognized more than 400 volunteers, 35 companies, and 25 outstanding local nonprofits for freely giving their time and talents to make Springfield a better place to live. 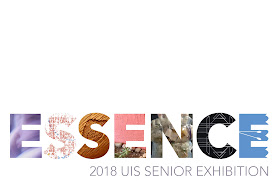 The University of Illinois Springfield (UIS) Visual Arts Gallery is proud to present “Essence”, an exhibition showcasing the creativity and skill sets of the senior Visual Arts majors at UIS. The exhibit will open on Monday, April 23, 2018 and run through Thursday, May 10, 2018. The reception will be held on Thursday, May 3, 2018, from 6 to 8 p.m. All gallery events are free and open to the public.

Each of the student artists have created works that collectively strive to transport the viewer, inviting individuals to immerse themselves and recognize not only how our surroundings affect our emotions, but also how individuals affect the environment.

For more information, visit the UIS Visual Arts Gallery website at www.uis.edu/visualarts/gallery or contact the gallery at 217/206-6506 or alach@uis.edu.
Blake Wood at 4:04 PM No comments:
Share 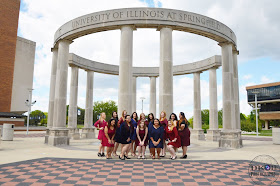 WHAT: University of Illinois Springfield students who are part of the Gamma Phi Omega International Sorority, Inc. Chi Chapter will host an American Diabetes Association walk on campus in hopes of raising $3,000 for the association. Members of the Springfield community are encouraged to participate, along with UIS students, faculty and staff.

DETAILS: The American Diabetes Association is Gamma Phi Omega International Sorority, Inc.’s national philanthropy. More than 30 million Americans live with diabetes in America today, and 1.5 million more will be diagnosed with diabetes this year. The money raised from the walk will help with research for a cure for diabetes, as well as providing funding for preventative aids and community support.

Anyone interested in participating can register for the walk at www.bit.ly/UISGPhiOADAWalk. A registration fee of $5 should be added to the donation section of the online registration form. There will also be open registration from 8 to 9:30 a.m. the morning of the walk.

Questions about the walk may be directed to Abbegayle Stevenson with the Gamma Phi Omega Chi Chapter by email at uis@gammaphiomega.org.
Blake Wood at 4:01 PM No comments:
Share 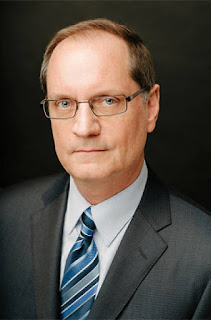 WHAT: The University of Illinois Springfield’s Illinois Innocence Project will hold the 11th annual Defenders of the Innocent fundraising event featuring attorney Jerry Buting from the Netflix documentary “Making a Murderer” and author of “Illusion of Justice.” Buting will speak about the workings of an often flawed justice system, as seen from his view as co-counsel in the sensational Steven Avery case and other innocence cases.

DETAILS: The Illinois Innocence Project will also recognize client Bill Amor who was exonerated February 21, 2018, after spending 22 years in prison as an innocent man. Amor was wrongly convicted of arson-murder in 1997 based on faulty fire investigation and a purported confession to starting the fire in a way that experts testified is scientifically impossible. Since its founding in 2001, the Illinois Innocence Project has helped to free 11 wrongly convicted individuals.

The Project will present “Defender of the Innocent” awards at this year’s event to The Exoneration Project and to retired Carbondale Police Officer Lt. Paul Echols. The Exoneration Project, a pro bono legal clinic at the University of Chicago Law School, provided critical work toward the exoneration of Bill Amor, by leading the trial team, expending countless resources and giving support before and after Amor's exoneration. Echols exemplifies the ultimate quest for justice in his continuing effort to seek the posthumous exoneration of Grover Thompson, now 22 years after the innocent man died in prison.

Registration for the Defenders of the Innocent event is required by Monday, April 23, 2018. Sponsorships are available. For more information or to purchase a seat, visit www.uis.edu/innocenceproject/ or call 217/206-6569.
Blake Wood at 11:32 AM No comments:
Share 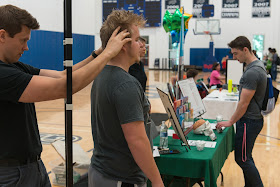 WHAT: University of Illinois Springfield Campus Recreation and Health Services presents the annual Health & Wellness Fair. The event will offer health screenings, information and door prizes. The fair is free and open to the public, students, faculty and staff.

WHERE: The Recreation and Athletic Center (TRAC) at UIS,  2171 University Drive, Springfield

The Central Illinois Community Blood Center will also be hosting a blood drive from 10 a.m. to 2 p.m. at The Recreation and Athletic Center (TRAC) for those interested in donating or blood typing. 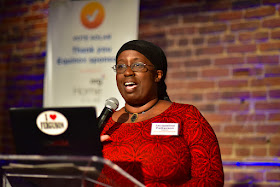 WHAT: The University of Illinois Springfield Engaged Citizenship Common Experience (ECCE) Speaker Series kicks off Earth Week with the keynote address, “Climate Change as a Civil and Human Rights Issue” by Jacqueline Patterson, NAACP director of environmental and climate justice. This event is free and open to the public.

DETAILS: As the director of the NAACP’s Environmental and Climate Change Justice Program, Jacqueline Patterson works with community leaders in the United States and around the world to address climate change as a human and civil rights issue.

Research demonstrates that climate change does not affect all communities equally. People of color, low income communities and women are more vulnerable to the negative effects of climate change. Patterson will discuss why climate change is an important human and civil rights issue and explain how the NAACP is working to empower community leaders to make a change.

Patterson, a researcher, program manager, advocate and activist is also the coordinator and co-founder of Women of Color United. She holds dual masters’ degrees in social work and public health. She sits on a number of local, national and International committees and boards. She will be introduced by local NAACP Environmental Justice Committee member, James Johnson.

This event is co-sponsored by the World Affairs Council of Central Illinois, UIS Campus Senate Committee on Sustainability and NPR Illinois/91.9 UIS.

Individuals with disabilities who anticipate the need for accommodations should contact the UIS Speaker Series Office at 217/206-8507 or speakerseries@uis.edu in advance. For a list of other upcoming ECCE Speaker Series events, visit www.uis.edu/speakerseries/.
Blake Wood at 12:08 PM No comments:
Share
‹
›
Home
View web version