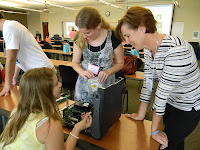 Highlighting the sessions this year are “Scrap-booking with iPad”, which will use Apple’s software tools for creating an app for storing favorite media; “Robots, robots, robots” will focus on robot construction; and “Starring YOU!”, where girls will record short videos and insert them into their favorite movie clips. Finally, using the MIT-designed language “Scratch”, the girls will create and program their own computer games.

Other sessions will include “Hi-Tech Design using Gimp”, which will allow girls to design a t-shirt for their team; “Anime Rock Goddesses” will use Japanese anime characters created just for Girl Tech as the students teach their divas to sing and dance; and “What’s to Eat?” will look at technology in the kitchen by making snacks with molecular gastronomy.

The registration fee is $30 per girl, which covers lunch both days, snacks and a participation t-shirt. To be eligible to participate, the girl must be entering 7th, 8th or 9th grade in the Fall of 2012. For more information about the camp and to register, visit http://csc.uis.edu/girltech/. The registration deadline has been extended to Wednesday, June 13 at 3 p.m.

WHAT: The University of Illinois Springfield Observatory and Sangamon Astronomical Society will be holding a special daytime “Star Party” to observe a Transit of Venus. The event will be led, in part, by John Martin, UIS assistant professor of Astronomy/Physics.

DETAILS: During this rare alignment Venus will appear as a dark disk passing across the bright surface of the Sun. Transits of Venus occur in pairs about every century. This is the second in the most recent pair, with the last transit in June 2004 and the next pair in December 2117 and December 2125.

There will be several telescopes with protective filters setup outside Erin’s Pavilion at Southwind Park to allow the public to safely view this once in a lifetime event. You should never look at the Sun directly or through a telescope with your naked eye. Amateur and professional astronomers will also be on hand to answer questions.

The transit begins at 5:05 p.m. central time and will still be in progress when the Sun sets at about 8:25 p.m. Venus will appear to move across the Sun at a stately pace that will be hard to detect in real-time as it traverses about one third of the solar disk in the three hours before local sunset.

For the past several months evening sky watchers have noticed Venus as a very bright object in the western sky visible well after sunset. Over the weeks preceding June 5, Venus will appear to rapidly dive toward the Sun as it overtakes and passes between the Earth and Sun on its swifter inner orbit.

The Earth’s and Venus’ orbits are tilted with respect to each other so that normally Venus appears to pass just above or just below the Sun when lapping the Earth on their race around the Sun. But on rare occasions the nodes of the orbits line up perfectly so that Venus is visible passing in front of the Sun from Earth’s vantage point. The alignment is so fine that observers at different points on Earth will see Venus take different paths across the face of the Sun. In the 18th and 19th centuries this effect was used to accurately determine the distance between the Earth and the Sun.

In the event of excessively cloudy weather the event will be cancelled. Participants may contact the UIS Astronomy-Physics at 217/206-8342 for more information or an update on the weather on the day of the event.
Blake Wood at 10:20 AM No comments:
Share 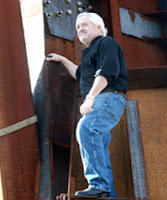