University of Illinois Springfield (UIS) Theatre is excited to announce its production lineup for the 2016-17 academic year. In fall 2016, the program will present Shakespeare’s "Macbeth". The spring 2017 production will be "Almost, Maine" by John Cariani.

Open auditions/crew interviews will be held Aug. 29-30, 2016 in The Studio Theatre. Callbacks will take place on Aug. 31. Auditions and crew positions are open to students, faculty, staff, and community members. Check www.uis.edu/theatre for times and information. Some of the crew positions available include stage management, props master, costume crew, sound designer, lighting crew and set construction.

"Macbeth" is one of the world’s most famous plays, with an aura of mystique and superstition surrounding even its title. The story explores the dark side of ambition, as the royal couple climb to power and then struggle to maintain it. Ghosts, witches, murder, suicide, guilt, prophecy, and the supernatural power of fate hang over the play, conveyed to the audience in some of Shakespeare’s most memorable language. Come see why Shakespeare’s work continues to affect us and hear how his view of the world lingers to this day.

The spring production, "Almost, Maine" will be performed April 7-9 and 13-15, 2017 in the Studio Theatre, located on the lower level of the Public Affairs Center. UIS Associate Professor of Theatre Eric Thibodeaux-Thompson will direct with scenic design by UIS Assistant Professor of Theatre Dathan Powell. Open auditions/crew interviews will be held Jan. 22-23, 2017 in The Studio Theatre. Callbacks will take place on Jan. 24. Auditions and crew positions are open to students, faculty, staff, and community members. Check www.uis.edu/theatre for times and information.

“On a cold, clear, moonless night in the middle of winter, all is not quite what it seems in the remote, mythical town of Almost, Maine. As the northern lights hover in the star-filled sky above, Almost’s residents find themselves falling in and out of love in unexpected and often hilarious ways. Knees are bruised, Hearts are broken. But the bruises heal, and the hearts mend – almost – in this delightful midwinter night’s dream.” – From Dramatists Play Service, Inc.

Ordinary people experience life’s greatest force – love – in funny, awkward, bittersweet, and redeeming ways. A particular time in a wondrous place changes the lives of all involved and reminds us that moments shared by two people are the times when we can be the most transformed.

For more information on the upcoming season, please visit the UIS Theatre website at www.uis.edu/theatre.
Blake Wood at 10:30 AM No comments:
Share 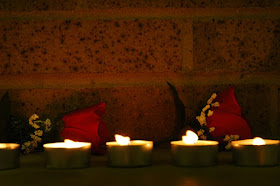