The Downstate Illinois Innocence Project, housed at the University of Illinois Springfield held its third Defenders of the Innocent Awards Reception on May 24 at the Governor’s Mansion in Springfield.

“Tonight is our celebration. It is a way for us to honor those folks (who have helped the program) and raise support,” said Larry Golden, project director.

The featured guest was Rolando Cruz, who along with his co-defendant Alejandro Hernandez, was wrongfully convicted and sentenced to death for the brutal murder of 10-year-old Jeanine Nicarico of Naperville in 1983.

“It’s a real big deal to us because my kids can thank them now and want to thank them,” said Cruz.

The Downstate Illinois Innocence Project works to assist the wrongfully convicted and to develop policy proposals that would help prevent the conviction of innocent persons in the future.

The project benefits UIS students by allowing them to work on real criminal cases and get experience outside the classroom.

“I’m actually looking at one case file right now to decide if we want to take a case. I had to go through 100 pages of files and do some research on it,” said Brett Walker, a UIS student intern on the project.

The project relies on private donations to cover the cost of their investigations, which can easily reach thousands of dollars.

The Innocence Project will celebrate its 10th anniversary next year and has plans for a celebration, along with launching new initiatives.

The Downstate Illinois Innocence Project, housed at the University of Illinois Springfield, will hold its third Defenders of the Innocent Awards Reception from 5 to 7 p.m. on Monday, May 24, at the Governor’s Mansion in Springfield. The featured guest at the reception will be exoneree Rolando Cruz. The event is open to the public; however, purchase of tickets and reservations are required by calling 217/206-7989.

Rolando Cruz, along with his co-defendant Alejandro Hernandez, were wrongfully convicted and sentenced to death for the brutal murder of 10-year-old Jeanine Nicarico of Naperville in 1983. Cruz’s case resulted in three trials even in the face of a confession from the true killer, Brian Dugan.

“The case stands as the most important example of prosecutorial misconduct in recent American legal history,” said Larry Golden, director of the Innocence Project.

Cruz will introduce three individuals who believed an injustice was occurring in his case and attempted to pursue the truth in the face of the forces of state authority. Each will be given a Profiles in Courage Award for the courage they displayed and the sacrifices they made. Mary Brigid Hayes (formerly Kenney) resigned as Assistant Attorney General for her refusal to accept the Illinois Attorney General’s order to continue to try Cruz in the face of evidence of his innocence. Former DuPage County Sheriff John Sam also resigned and gave up his law enforcement career for his insistence on following other leads in the case due to his belief that Cruz and Hernandez did not kill young Nicarico. Former Illinois State Police Commander Edward Cisowski retired from his position as a result of superiors interfering in his follow-up on the Dugan lead, which yielded the confession.

“Each of them sacrificed their careers in the pursuit of truth and justice in the face of a team of prosecutors and law enforcers who were intent on convicting Cruz and Hernandez. They are true role models for American justice,” said Golden praising the three recipients as heroes.

A Pro Bono Award will be presented to Feldman, Wasser, Draper & Cox - for their work on the Thomas McMillen case. McMillen was convicted of the 1989 Sangamon County murder of Melissa Koontz, but has always maintained his innocence.

Gates, Wise & Schlosser, P.C. will also be presented with a Pro Bono Award for their work on the Slover case. Michael Slover, Jr. and his parents, Michael Sr. and Jeannette Slover were convicted in the 1996 Macon County murder of Karyn Slover. The Slovers were convicted despite the lack of any physical evidence or any kind of coherent theory on how they could have committed this crime.

Bill Clutter, the project’s director of investigations, who worked on both cases with Peter Wise, Stan Wasser and Howard Feldman, said, “It is the generosity and determination of lawyers like them that can lead to freeing innocent people from prison who do not have the resources to defend themselves. They are true champions of justice and deserve this recognition.”

The Downstate Illinois Innocence Project works to assist the wrongfully convicted and to develop policy proposals that would help prevent the conviction of innocent persons in the future. This awards reception is the third annual event to recognize individuals and organizations who have worked to help achieve those goals.

For more information, contact Larry Golden at 217/553-7171 or email lgold1@uis.edu. You many also visit the Innocence Project website at www.uis.edu/innocenceproject/
Blake Wood at 1:52 PM No comments:
Share 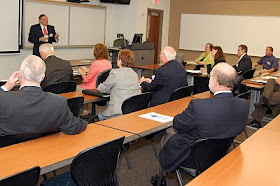 The Executive Advisory Committee for UIS’ College of Business and Management met with Dean Ron McNeil at the University of Illinois Springfield on Friday, May 14.

Discussion points included: the competencies UIS business graduates need to be successful, how the college could assist with the committee members’ own plans for employee development, and the interactions they would like in the future with the faculty, staff, and students of the college.

Results of the discussion will form the basis of actionable outcomes for the College of Business and Management in the coming year.

For more information contact Joe Hughes, director of development for the UIS College of Business & Management at jhugh3@uis.edu.
Blake Wood at 10:04 AM No comments:
Share 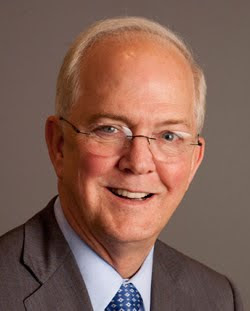 WHAT: Announcement Ceremony at the University of Illinois Springfield

The public and university community are invited to attend this event.
Blake Wood at 2:09 PM No comments:
Share

The annual Retirement and Recognition Ceremony was held on Thursday, May 6, in the Sangamon Auditorium lobby.

Employees who have retired, or who will retire during the 2009-2010 academic year were also honored.

Watch the ceremony on UIS video on demand
Blake Wood at 11:15 AM No comments:
Share

The University of Illinois Springfield will host the 10th annual State Politics and Policy Conference (SPPC) from June 3-5 with the theme “Political Scientists Meet Political Practitioners in the States – How Can We Help?” The core of the SPPC will be a series of 20 panels of political scientists presenting their cutting edge research on state legislatures, governors, policy, federalism, and more. These scholars will come from around the country and even overseas. Approximately 150 people will attend. This annual national conference is hosted by a different university every year; this is the first time the event has been held in Illinois.

“UIS was chosen to host this special 10th anniversary SPPC because it has been the focal point of the renaissance of scholarship into state politics and policy in political science over the past decade,” said Chris Mooney, UIS political science professor and co-chair of the event.

An opening reception and roundtable featuring former governors from four different states, entitled “How Can Political Scientists Contribute to Politics and Government?”, will kick-off the conference on Thursday, June 3. Former Governors Jim Edgar (R) of Illinois (1991-1999), Madeleine Kunin (D) of Vermont (1985-1991), Parris Glendening (D) of Maryland (1995-2003), and Bob Taft (R) of Ohio (1999-2007) will take part in the discussion; Dr. Robert Rich, director of the Institute of Government and Public Affairs at the University of Illinois, will moderate. The event will be held at the Old State Capitol. Guests may start to arrive at 7 p.m., with the round table discussion taking place from 8 to 10 p.m. This event is free and open to the public and no registration is required. Media may arrive starting at 7 p.m. for individual interviews before the event.

“The assembly of so many and so diverse a group of former state leaders is a rare event, and it will be held in an historic setting-- the Hall of Representatives of the Old State Capitol in downtown Springfield,” said Mooney.

On Friday, June 4 the SPPC will host a banquet in the rotunda of the Abraham Lincoln Presidential Museum. Alan Ehrenhalt, Director of Information for the Pew Center on the States will be speaking on the topic of “Governors: Success and Failure”. A reception begins at 6 p.m. and Ehrenhalt will take the stage at 8 p.m. The banquet is only open to conference registrants. The media are welcome to attend the presentation and may arrive between 6 p.m. and 7 p.m. for individual interviews.

Twenty panel discussions are scheduled on the UIS campus on Friday, June 4, and Saturday, June 5, from 9 a.m. to 5 p.m. For a full list of topics, paper presenters, and times visit the conference’s website at www.sppc2010.org. These panels are free and open to the public with no registration required.

Mooney helped establish the annual SPPCs in 2001, when he founded what has become the most important academic journal in the field, State Politics and Policy Quarterly, in partnership with the UIS Center for State Policy and Leadership. The conference began as a way to support and augment the journal.

“Hosting the 10th Annual State Politics and Policy Conference is a major boost to the prestige and national standing of UIS,” said Mooney. “For UIS to be selected as the first small university to host the SPPC is a significant honor.”

The SPPC conference sponsors include the UIS Center for State Policy and Leadership, the University of Illinois Institute of Government and Public Affairs, and the UIS College of Public Affairs and Administration.