Speakers Series presents "Is Wrongful Conviction of the Innocent a Constitutional Crisis?" 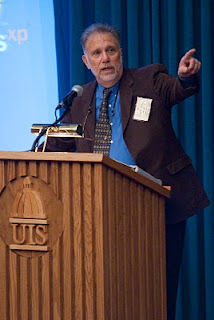 WHAT: The University of Illinois Springfield Engaged Citizenship Common Experience (ECCE) Speakers Series presents “Is Wrongful Conviction of the Innocent a Constitutional Crisis?” This forum is being held in commemoration of Constitution Day in the United States.

WHERE: Sangamon Auditorium Lobby, on the 2nd floor of the Public Affairs Center

DETAILS: The discussion will be led by Larry Golden, co-director of the Downstate Illinois Innocence Project at UIS and John Hanlon, assistant deputy defender of the Office of the State Appellate Defender.

The issue of wrongful convictions has most recently come to our attention due to advances in forensic science that have led to the reversal of hundreds of convictions. The question is whether in light of these exonerations, the rights guaranteed in the constitution, such as the right to counsel, to due process and to equal protection of the law are being abrogated in criminal justice prosecutions.

Larry Golden helped found the Downstate Illinois Innocence Project at UIS in 2000 and presently serves as pro-bono co-director. The Project was the first undergraduate /master’s project in the country to utilize students to undertake investigations of actual innocence cases.

John Hanlon has for the last 10 years been an attorney working in the Death Penalty Trial Assistance division of the Office of the State Appellate Defender. As such he oversees and participates in capital cases throughout the state of Illinois.