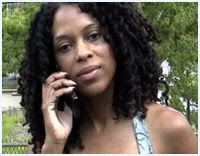 DETAILS: Natural Woman is a documentary that explores the psychological and philosophical implications of what occurs when African-American women chooses to stop straightening their hair and wear it naturally. This taboo and sometimes, painful topic, has been largely confined to private discussions within the Black community only. Natural Woman was created to invoke open and honest dialogue regarding the subject matter in community and educational forums.

Cindy Hurst is a native of Baton Rouge, Louisiana. She is the owner of The Sankofa Project, a film production and publishing agency developed to tackle cultural and gender issues.

This event is being coordinated by the UIS student organization “Kinky & Curly: Natural Hair Empowerment Club”, whose purpose is to reconstruct societal definitions of beauty, while celebrating natural uniqueness. UIS student Ashley Price led the club’s effort to bring Hurst to campus. Other groups co-sponsoring this event include the UIS Diversity Center and Women’s Center.