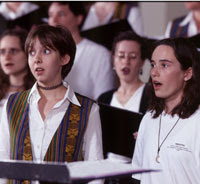 WHAT: The University of Illinois Springfield Engaged Citizenship Common Experience (ECCE) Speakers Series presents “Songs of Power”, a concert by Amasong: Champaign-Urbana's Premier Lesbian/Feminist Chorus. The event will be followed by a discussion and light refreshments.

DETAILS: Music can change the world! From the Underground Railroad in the United States to the struggles against Apartheid and AIDS in South Africa music has helped change society. From the empowerment of one woman in the ancient world, to a Chinese feminist revolutionary a century ago, to the peace and justice movements of today music is powerful. Singing has the ability to join minds, hearts, and hands in work for positive change.

Amasong is an award-winning amateur lesbian/feminist chorus based in Champaign-Urbana. Amasong's repertoire draws most heavily upon folk music from various world traditions, music written by women, and other music reflecting women's experiences.

The concert is free and open to the public. For more information contact Pamela Salela at 217/206-6783 or email psale2@uis.edu.