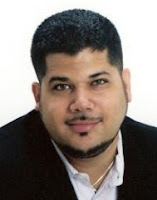 DETAILS: Dubbed one of the most dynamic speakers under thirty in America today, Carlos Ojeda extends the touch of mere spoken words, to transform them into powerful thought-provoking, emotionally charged commentaries about life, education and society. His lectures represent a model of transformational leadership throughout the community, speaking on issues of education, empowerment, and progress.

Ojeda’s life began in the streets of Newark, New Jersey and later to Reading, Pennsylvania where his immigrant parents saw opportunities for themselves and for their first generation Puerto Rican children. Not understanding his social, economic and cultural background, many of his high school teachers told him he would never amount to anything. One teacher once called him, “the greatest piece of garbage he had ever seen.” Yet his drive, passion and dreams led him to overcome those obstacles and pursue a career of life learning and educational success, being the first person in his family to graduate from college with honors. His experiences have led him to always remind Latino youth to, “never, ever, ever let anyone tell you who you are or what you will become. That’s your destiny to fulfill, no one else’s.” For more information, visit www.carlosojedajr.com.

This event is co-sponsored by the Organization of Latin America Students at UIS. For more information and a list of other Speakers Series events, visit http://illinois.edu/goto/speakerseries or contact Kimberly Craig at 217/206-6245 or craig.kimberly@uis.edu.
Blake Wood at 10:54 AM
Share