ECCE presents "Latinas and Latinos in Illinois and the Midwest" 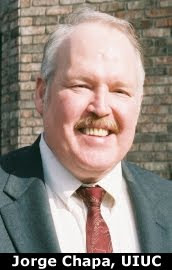 WHAT: The University of Illinois Springfield Engaged Citizenship Common Experience (ECCE) Speakers Series presents a discussion entitled “Latinas and Latinos in Illinois and the Midwest: Demographics and Transformations” as part of Hispanic Heritage Month.

DETAILS: Now that the Census 2010 results are in, we know that there are more Latinas/os in more parts of the United States than previously estimated. What impact is this demographic shift having on society, economics, and politics in the Midwest and Illinois? We will learn about the social transformations generated by the largest minority group today (16% of the U.S. and Illinois populations) from Jorge Chapa.

Dr. Chapa, born in Monterrey, Mexico and raised in Chicago, is a Professor of Government & Public Affairs, Sociology and Latina/Latino Studies at the University of Illinois at Urbana-Champaign and coauthor of Apple Pie and Enchiladas: Latino Newcomers in the Rural Midwest. He also served as Associate Dean of Graduate Studies and Director of the Graduate Opportunity Program at UT Austin. In the first three years of his appointment, the proportion of Latinos entering graduate programs increased by 25% and the African American proportion increased 15%. In the fourth year, the Hopwood decision ended race-conscious affirmative action in Texas. In response, he along with other professors and legislators formulated the Texas Top Ten Percent Plan.

Chapa received his M.A. and Ph.D. in Sociology as well as his M.A. in Demography from the University of California, Berkeley. He has scores of publications reflecting his research focus on policy issues pertaining to Latinos and other groups with low incomes and educational levels. Apple Pie and Enchiladas was nominated for the Senior Book Award of the American Ethnological Society.

This event is co-sponsored by the Sociology/Anthropology Department & the UIS Organization of Latin American Students. For a list of other Speakers Series events, visit http://illinois.edu/goto/speakerseries.
UIS Web Services at 3:24 PM
Share