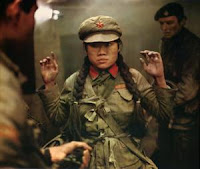 WHAT: The Political Art and the Public Sphere (PAPS) series presents a screening of the film “The Gladiators”, which will be followed by a group discussion.

DETAILS: In "The Gladiators" (1969), Peter Watkins’ applies his “false documentary” style to what could be called “political science fiction.” The story takes place in the near future. To maintain international and internal security and to divert warfare, the UN organizes a series of military games, which are often fought to the death. Based on the gladiatorial games of ancient Rome, these are called the “International Peace Games.” ‘The competitions are broadcast on global television via satellite, complete with sponsors and commercials. The film follows Game 256, which is being ‘played’ in the International Peace Game Center near Stockholm. The officers watching the game try to eliminate players from opposing teams who reach out to each other when they decide that such forms of communication could be the gravest threat of all to the stability of the existing world system.

The PAPS series is a monthly event on the UIS campus featuring a showing or a performance of some kind of “political art,” followed by an hour or two of group discussion. Each of the three installments in the fall 2011 series will focus on Peter Watkins. All events are free and open to the public.

For more information contact Dr. Richard Gilman-Opalsky, professor of Political Philosophy at rgilm3@uis.edu or 217/206-8328.
Blake Wood at 9:37 AM
Share