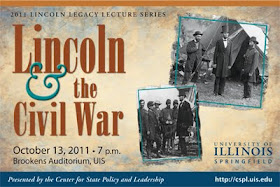 WHAT: The 9th annual Lincoln Legacy Lectures, presented by the University of Illinois Springfield, will discuss “Lincoln and the Civil War.” The lectures, and a reception and book signing that will immediately follow, are free and open to the public. No reservation is required.

DETAILS: The Lincoln Legacy Lecture Series brings nationally known scholars to Springfield to discuss issues that are of contemporary interest and also engaged Abraham Lincoln and citizens of his era.

Burlingame’s lecture will focus on “Lincoln as the Indispensable Man: The Central Role of His Leadership in Determining the Outcome of the Civil War." Morel’s lecture will reflect on “War and Remembrance in Lincoln’s Second Inaugural Address.”

Seating in Brookens Auditorium is limited; however overflow seating will be available in conference room C/D, where the audience can watch a large-screen live video feed. Conference room C/D is located on the lower level of the Public Affairs Center at UIS. Those unable to attend in person can watch a live webcast by going to www.uis.edu/technology/uislive.html at the time of the event.