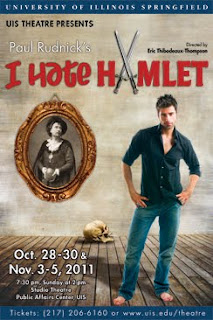 The Theatre Program at the University of Illinois Springfield will debut its 2011-12 season with the play I Hate Hamlet by Paul Rudnick, opening Friday, Oct. 28. Six performances will be presented in the Studio Theatre, on the lower level of the Public Affairs Center at UIS - on Friday, Saturday, Sunday, Oct. 28, 29, and 30, and Thursday, Friday, Saturday, Nov. 3, 4, and 5. All shows will begin at 7:30 p.m., except the Sunday performance (Oct. 30), which will begin at 2 p.m.

A young and successful television actor relocates to New York, where he rents a marvelous, gothic apartment. With his television career in limbo, the actor is offered the opportunity to play Hamlet onstage, but there's one problem: He hates Hamlet. His dilemma deepens with the entrance of John Barrymore's ghost, who arrives intoxicated and in full costume to the apartment that once was his. The contrast between the two actors, the towering, dissipated Barrymore whose Hamlet was the greatest of his time, and Andrew Rally, hot young television star, leads to a wildly funny duel over women, art, success, duty, television, and yes, the apartment.

The Village Voice hails the play as "fast-mouthed and funny...It has the old-fashioned Broadway virtues of brightness without pretensions and sentimentality without morals," while the New York Times call it “unapologetically silly and at times hilarious...affectionately amusing about the theatre."

Ticket prices are $12 for adults, $10 for senior citizens (65 or older with a picture I.D.), $8 for UIS Faculty/Staff and $6 for UIS students with a valid i-card*. Tickets are now available at the Sangamon Auditorium Ticket Office, located on level two of the Public Affairs Center. Purchase tickets in person, by phone at 217/206-6160 or 800/207-6960 between 10 a.m. and 5 p.m. Monday through Friday, or online at www.uis.edu/theatre. Tickets will also be available at the ticket office on the day of the performance, beginning 90 minutes before curtain time. *Please note that a $2 Sangamon Auditorium “Stage Operating Surcharge” is added to all tickets purchased, and for mail and phone purchases, an additional $4 service fee is added. On-line tickets are assessed a convenience fee by Sangamon Auditorium Ticket Office based on ticket price.

For more information on the upcoming theatre season contact Eric Thibodeaux-Thompson at 217/206-6613 or email ethib1@uis.edu.
Blake Wood at 3:53 PM
Share