Wepner Symposium on the Lincoln Legacy and Contemporary Scholarship 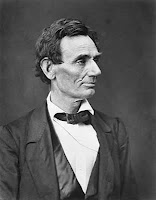 The University of Illinois Springfield Political Science Department presents the second Wepner Symposium on the Lincoln Legacy and Contemporary Scholarship, to be held Oct. 21-23, 2011. Portions of the symposium will take place at UIS, the Old State Capitol, and the Abraham Lincoln Presidential Library.

The event brings together scholars with diverse intellectual backgrounds, from political science to history and economics, and also seeks to bridge the gap between K-12 and university education. This year's theme, marking the Civil War's sesquicentennial, is "The Civil War: Causes, Conduct, and Consequences". All events are free and open to the general public.

Events begin on Fri., Oct. 21 in the Public Affairs Center Restaurant on the UIS campus. The opening session focuses on “Causes of the Civil War”, which runs from 7 to 8:30 p.m. The discussion will feature Paul Poast of Rutgers University, a political scientist with a background in economics and international relations who will be presenting a paper that argues Lincoln’s decision to use force was motivated by a desire to preempt British recognition of the South.

Day two of the Wepner Symposium begins on Sat., Oct. 22 at 9 a.m. at the Old State Capitol in downtown Springfield. The morning theme will focus on “Conduct of the Civil War – Lincoln’s Presidency” and will run until noon. The discussion will feature Fred Greenstein, an Emeritus professor from Princeton University and a preeminent senior scholar on the American presidency. He will speak about an upcoming chapter in his new book, which applies his presidential leadership model to Lincoln’s tenure. Chad Newswander, an assistant professor of political science at the University of South Dakota whose research focuses on presidential protection will speak next. Newswander will be discussing the security problems of the Lincoln presidency. Following Newswander, Stewart Winger, an associate professor of history at Illinois State University, will deliver a talk on Lincoln’s leadership on the issue of race, slavery, and whether African Americans could live as free citizens in the United States. Thomas Schneider, an assistant professor and director of political science at the University of Saint Francis will deliver the final morning presentation on the issue of African American colonization during the Civil War.

Following lunch, the afternoon topic turns to “Conduct & Consequences of the Civil War” from 1 to 5 p.m. at the Abraham Lincoln Presidential Library in downtown Springfield. The afternoon will begin with a discussion led by Shamira Gelbman, assistant professor of politics and government at Illinois State University, who will discuss post-Civil War racial politics in comparative context against the case of the Boer War and its aftermath leading up to the apartheid era, from which Nelson Mandela emerged. The next talk by Richard Lawrence Miller, author of the Lincoln and His World book series, will discuss the role of mercenaries in the battle between pro-slavery and free labor forces in Kansas just before the Civil War. Next, Matthew Holden, Jr., Wepner Distinguished Professor in Political Science at the University of Illinois Springfield will offer some semi-formal comments on three points. Those points: (1) What did the Civil War produce?; (2) What does the Civil War mean for contemporary politics?; (3) What do Civil War studies mean for contemporary political science? The final roundtable will be led by Dave Robertson, professor of political science at the University of Missouri-St. Louis, who will review the lessons learned from the symposium and their impact on undergraduate education and K-12 education.

For more information on the Wepner Symposium, contact Gene Giannotta at 630/329-7516 or email ggiannot@uis.edu. You may also visit the event's Facebook page.
Blake Wood at 1:13 PM
Share