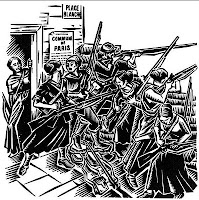 WHAT: The Political Art and the Public Sphere (PAPS) series presents a screening of the film “La Commune”, which will be followed by a group discussion.

DETAILS: “La Commune” was the name of the French revolutionary government established by the people of Paris in 1871. On March 17 and 18, Parisians led an uprising against the national government, which fled the capital and reestablished itself in Versailles. The radicals established a government in Paris that became known as the Commune of 1871, whose members were known as the Communards. Most Communards were followers of Louis Blanqui, a revolutionary held prisoner in Versailles by the head of the National Assembly. Other Communards supported the form of socialism expounded by the French philosopher Pierre-Joseph Proudhon. Some were supporters of the ideas of Karl Marx.

In “La Commune”, we travel back in time to 1871. A journalist for Versailles Television broadcasts an “official” view of events while Commune Television is set up to provide the perspectives of the Paris rebels. On a stage-like set, more than 200 actors interpret characters of the Commune.

The PAPS series is a monthly event on the UIS campus featuring a showing or a performance of some kind of “political art,” followed by an hour or two of group discussion. Each of the three installments in the fall 2011 series will focus on Peter Watkins. Watkins (born 1935) is an English film and television director. Watkins is known for his political statements about film and television media. All events are free and open to the public.

For more information contact Dr. Richard Gilman-Opalsky, professor of Political Philosophy at rgilm3@uis.edu or 217/206-8328.
Blake Wood at 11:49 AM
Share