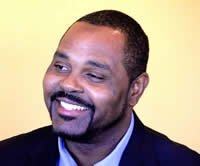 DETAILS: In 1998, Anthony Murray was convicted of first degree murder in Marion County and sentenced to 45 years in prison. In 2011-12, Illinois Innocence Project attorney John Hanlon, working with students from UIS, the University of Illinois, and Southern Illinois University law schools, reviewed Murray’s case. They discovered that Murray’s attorney knowingly called a witness who would incriminate his client. In June 2012, a Marion County Associate Judge ruled that Murray had received ineffective assistance of counsel and vacated Murray’s conviction.

Under the threat that the state’s attorney would bring him to trial again, in order to gain his freedom Murray was forced to accept a plea to second-degree murder and was released on time served. By pleading to a lesser crime while still maintaining that he was innocent of all charges, the “Alford Plea” allowed him to return home to his mother and family, but left a stain on him and on what the Illinois Innocence Project believes should have been a complete exoneration, clearing Murray of all charges.

For more information on the case, contact Larry Golden, Illinois Innocence Project director, at lgold1@uis.edu.
Blake Wood at 10:24 AM
Share