The University of Illinois Springfield Volunteer & Civic Engagement Center and the Junior League of Springfield honored more than 40 Sangamon County volunteers during the annual Good as Gold Ceremony. The event was held on Tuesday, April 16 in the Sangamon Auditorium Lobby at UIS. 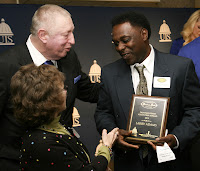 Larry Adams, an Ameren gas operations supervisor, was honored with the 2013 Distinguished Volunteer Award. He has been volunteering at Springfield’s Matheny-Withrow Elementary School for the past 25 years. Adams started tutoring students at the school in 1988, but his commitment has since grown.

In March, Adams presented a $4,500 check from Ameren to the school’s principal to help buy books, crayons, paper and other items. It is not uncommon for Adams to use his own money to buy things for the school. On Halloween, he’s provided candy for the entire school. For eight years, he selected a class at Christmas and purchased gifts for all the students. One year, he gave Barnes and Noble gift certificates to all the teachers.

Adams also has a knack for recruiting other employees to volunteer at the school. Since 2002, he has chaired the weekly tutoring program, scheduling and handling logistics for a team of volunteer tutors who spend more than 500 hours per year inside and outside the classroom, teaching reading and math and hosting special events aimed at developing the students. He has also become a positive role model for many of the students.

Community member Hailey Judge was honored with the Youth Volunteer Award for efforts at the Lincoln Home National Historic Site where she spent over 50 hours volunteering in 2012. Springfield Public School’s AVID Tutoring Program senior mentors Kaylynne Beck, Robin Franklin, Chelsea Hayes, Sinclaire Loughary, and Raechal Stacy were also honored with the Youth Volunteer Awards. The Douglas Avenue United Methodist Church was recognized with the Organization Agent of Service Award for its contributions to the community.