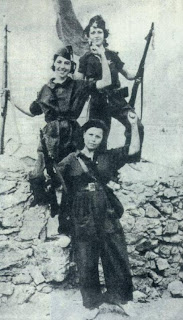 WHAT: The Political Art and the Public Sphere (PAPS) series at the University of Illinois Springfield presents a screening and discussion of the documentary Into the Fire, a film about American women in the Spanish Civil War.

DETAILS: In 1936 right-wing military officers in Spain led by General Franco (supported by Hitler and Mussolini) attempt to overthrow the newly elected, democratic government. In response, nearly 80 American women joined the “Good Fight,” volunteering, in defiance of the U.S. government, to help fight the Fascists in what would become the Spanish Civil War. In this enthralling and meticulously researched documentary, 16 of these brave and idealistic nurses, writers and journalists share stories of courage and commitment to their cause.

The PAPS series is a monthly event on the UIS campus hosted by Dr. Richard Gilman-Opalsky, associate professor of Political Philosophy. The theme of the Spring 2013 Political Art and the Public Sphere series, Women and War, is dedicated to discussions of ignored, marginalized, misrepresented, and underrepresented social and political questions relating to the experiences of women in war.

This event is co-sponsored by the UIS Women’s Center and the Women’s Issues Caucus. All events are free and open to the public.