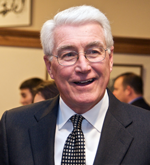 WHAT: Former Illinois Governor Jim Edgar will join a panel of distinguished guests to discuss how the economic, social & political differences between Chicago and the rest of the state present challenges for the governance of Illinois.

DETAILS: This panel discussion will explore how the perceived division between Chicago and the rest of Illinois is affecting state leadership and decision making, public perceptions of governmental effectiveness, and political and social operations.

Edgar, a distinguished fellow with the University of Illinois Institute for Government and Public Affairs (IGPA), was the 38th governor of Illinois. As governor, he made fiscal discipline and children the cornerstones of his two terms. First elected in 1990, Governor Edgar won re-election in 1994 by the largest margin ever for a governor. Four years later Governor Edgar left office with the highest approval rating in state history.

“The Two States of Illinois” presentation is sponsored by the University of Illinois Springfield Engaged Citizenship Common Experience (ECCE) Speakers Series and the Central Illinois Chapter of the American Society of Public Administration (ASPA).