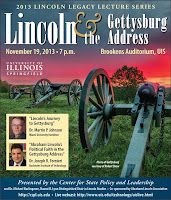 The 11th Annual Lincoln Legacy Lectures presented by the University of Illinois Springfield will be held from 7 to 9 p.m. Tuesday, November 19, 2013 in Brookens Auditorium, located on the lower level of Brookens Library at UIS.

This year’s topic is “Lincoln and the Gettysburg Address”, commemorating the 150th anniversary of Lincoln’s immortal speech. The lectures, and a reception and book signing that will immediately follow, are free and open to the public. No reservation is required.

This year’s featured speakers are Dr. Martin P. Johnson, assistant professor of history, Miami University-Hamilton, and Dr. Joseph R. Fornieri, professor of political science and Director of the Center of Statesmanship, Law, and Liberty at Rochester Institute of Technology. Dr. Michael Burlingame, Chancellor Naomi B. Lynn Distinguished Chair in Lincoln Studies at UIS, will give opening remarks on the relevance of the Gettysburg Address for Americans today, and serve as moderator.

Johnson’s lecture will discuss “Lincoln’s Journey to Gettysburg”, tracing Lincoln’s new vision of the American experiment in the words of his speech. In his lecture, “Abraham Lincoln’s Political Faith in the Gettysburg Address”, Fornieri will consider Lincoln’s statesmanship in preserving the nation’s political faith at Gettysburg and the meaning of its “new birth of freedom” in defending, affirming, and extending the Founders’ legacy of equality and self-government.

Johnson’s research has focused on the American Civil War and the politics of the Lincoln Administration. His most recent book, Writing the Gettysburg Address (University Press of Kansas, 2013) resolves longstanding mysteries about how Lincoln wrote his most admired speech. Fornieri is the author of several books on Lincoln’s political thought including Abraham Lincoln’s Political Faith (Northern Illinois University Press, 2005) that explores Lincoln’s religion and politics.

Burlingame and central Illinois photographer Robert Shaw have collaborated on a new book, A Day Long to Be Remembered – Lincoln in Gettysburg (Firelight Publishing, 2013). Slides of Shaw’s photographs of Gettysburg will be shown before the lectures begin at 7:00 and the book will be available for purchase after the program.