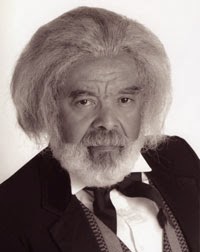 DETAILS: Morsell compiled the performance content from Douglass’ most significant commentary on the issue of slavery and race discrimination, and how to overcome its soul-devouring and life destructive effects. This journey takes the audience through relevant periods in Douglass’ life. The development of his thought illustrates the stages of his personal transformation in the understanding of race, and culminates in his illumination about the way to experience our common humanity beyond categories.

Morsell is a professional actor whose career includes seasons with The Repertory Theatre of Lincoln Center, The New York Shakespeare Festival, and other national and regional theatres in the U.S. He sung leading roles in operas and was the weekend announcer for the Los Angeles PBS affiliate.

He began his Frederick Douglass career in 1984 when he read Douglass’ work as part of an alternative program he helped develop for inner city youth. The experience was an awakening for him. Since then, he’s portrayed Douglass for colleges, civic groups, churches and theatres. He also led seminars and workshops on improved black and white relations through his non-profit organization, Fremarjo Enterprises, Inc. Morsell is an actor, director and teacher with the Terry Schreiber Studio in New York City.

For a list of other upcoming ECCE Speaker Series events and more information, visit www.uis.edu/speakerseries/. All events are free and open to the public.
Blake Wood at 10:30 AM
Share