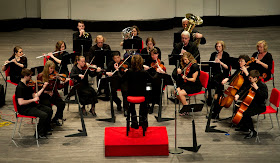 WHAT: The University of Illinois Springfield Music Program presents its second of two Showcase concerts this fall, featuring performances by the UIS Flute Choir, UIS New Orleans Brass Band, and UIS Band. The performances are free and open to the public.

DETAILS: The event will feature a wide array of music including pieces by Anne McGinty, Michael Jackson, Dmitri Shostakovich, and Percy Grainger.

The UIS Flute Choir, under the direction of Applied Music Specialist Abigail Walsh, will lead the program with an arrangement of "Simple Gifts" by Ricky Lombardo. Other pieces include "Masques", by Anne McGinty, and "Let There Be Peace on Earth" by Sy Miller and Jill Jackson.

Directed by Brian Pryor, the New Orleans Brass Band will perform arrangements of “A Closer Walk With Thee” and "Brooklyn" and end with Michael Jackson's "Human Nature".

The UIS Band will end the program under the direction of Abigail Walsh, starting with Steven Reinecke's exciting overture "Defying Gravity". Other works include "West River Jubilee" by John Darling, and "Symphony No. 1 In Memorian- Dresden 1945" by Daniel Bukvich, among others. The concert will conclude with Dmitri Shostakovich's march, "Galop".