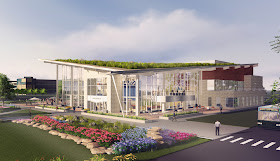 WHERE: UIS South Quad – Parking available in the University Hall or TRAC lots

DETAILS: The two-story, 50,000-square-foot facility will anchor the campus’s south quad, providing campus dining services, a coffee shop, a ballroom with seating for up to 450 people and a Student Leadership Center that will house student government, volunteer offices and workspaces for student organizations. The facility is scheduled to open in January 2018.

More than $5.3 million in gifts have been raised and officials say they will meet their $8 million fundraising goal before the facility opens. The remaining $13.7 million will be paid through campus funds and a construction fee that students approved in a 2012 referendum.

The new facility will fill a void that has grown since UIS became part of the University of Illinois system in 1995. The campus originally catered to upperclassmen and graduate-level students, but is now a traditional four-year school without the central gathering place for students.

William Brothers Construction Inc. of Peoria will be the general contractor for the project. Subcontractors include E.L. Pruitt Co. of Springfield, Commercial Mechanical Inc. of Dunlap and Foster Jacob Electric Inc. of Peoria. Dewberry Architects of Peoria and Workshop Architects of Milwaukee, Wisconsin developed design plans for the new facility.