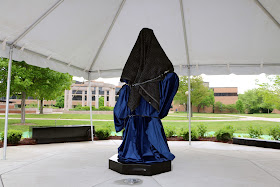 WHAT: The University of Illinois Springfield will unveil The Young Lawyer, a 6' 4" statue of Abraham Lincoln sculpted by renowned artist George Lundeen. The statue will be located on the UIS quad west of the colonnade.

WHERE: UIS quad, between University Hall and the Public Affairs Center

DETAILS: The unveiling celebrates the addition of a new Lincoln-centered landmark at UIS, home of the Chancellor Naomi B. Lynn Distinguished Chair for Lincoln Studies and the annual Lincoln Legacy Lectures, and the seminal host of the Papers of Abraham Lincoln.

Sculptor George Lundeen specializes in detailed, highly polished bronzes of subjects, such as Benjamin Franklin and Thomas Jefferson. He also created the popular sculptor of Red Grange that sits outside Memorial Stadium on the University of Illinois at Urbana-Champaign campus. His commissioned work can be found in private and corporate collections across the country.

The statue was made possible by the John N. Chester Estate Fund, an endowed gift fund created with the intent of adding to the attractiveness of the University of Illinois campuses.

The event will be hosted by the UIS Office of Advancement. A reception will follow the remarks and unveiling. The event is free to all attendees. The dress code is casual/business casual.
Blake Wood at 9:31 AM
Share