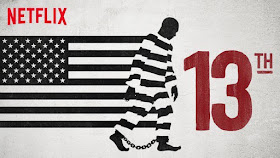 DETAILS: Centered on race in the United States criminal justice system, the film is titled after the Thirteenth Amendment to the constitution, which outlawed slavery (unless as punishment for a crime). The documentary argues that slavery is being effectively perpetuated through mass incarceration.

The filmmaker argues that the criminal justice system has been exploited through a variety of bad legislation measures passed by and supported by many U.S. congress members and U.S. presidents. As a result, many African Americans and other minorities from impoverished environments found themselves in vulnerable positions, mostly commonly landing them in prison after the passing of this legislation.

This event is co-sponsored by the UIS Diversity Center. For a list of other upcoming ECCE Speaker Series events, visit www.uis.edu/speakerseries/. All events are free and open to the public.
Blake Wood at 3:00 PM
Share