UIS lecture explores "Muslims in America: Challenges and Opportunities in the Trump Administration" 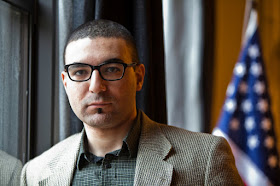 WHAT: The University of Illinois Springfield presents “Muslims in America: Challenges and Opportunities in the Trump Administration” featuring Ahmed Rehab, the executive director of the Chicago office of the Council on American-Islamic Relations. The lecture is free and open to the public.

DETAILS: Rehab will discuss civil rights challenges of American Muslims and immigration and will conclude with suggestions on how United States institutions of higher education can welcome Muslim students and scholars.

An informal discussion with the speaker will also take place from 6 to 7:30 p.m. in the Brookens Auditorium before the lecture. Snacks and refreshments will be offered after the events.

Rehab was born in Cairo, Egypt to a Chemical Engineer and a Russian Interpreter, and grew up between Cairo and Manchester, England. He moved with his parents to the United States in 1992. He completed his undergraduate studies in psychology at the University of Illinois at Chicago and his graduate studies in software engineering at DePaul University.

The Council on American-Islamic Relations is the nation’s largest Muslim civil liberties and advocacy group.

This event is sponsored by the UIS Muslim Student Organization, the UIS Diversity Center, the UIS Division of Student Affairs, UIS International Student Services, and the Islamic Society of Greater Springfield.

For more information, contact Ali Nizamuddin, UIS associate professor of political science, at 217/206-8424 or aniza2@uis.edu.
Blake Wood at 11:46 AM
Share