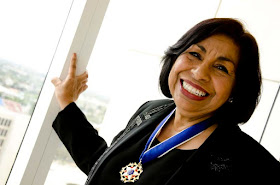 WHAT: The University of Illinois Springfield Engaged Citizenship Common Experience (ECCE) Speaker Series and NPR Illinois will host civil rights activist Sylvia Méndez, recipient of the 2011 Presidential Medal of Freedom, who will discuss her efforts to desegregate schools. This Hispanic Heritage Month and Constitution Day event is free and open to the public.

DETAILS: When Sylvia Méndez was eight years old, her parents organized with four other Mexican-American families and filed a law suit in federal court against four Orange County, California school districts. Her family’s case, Mendez v. Westminster, paved the way in 1947 for the famous Supreme Court case, Brown v. Board of Education which led to desegregation of schools across the country eight years later.

Their story demonstrates how a small group of citizens can and have changed the course of history. Their actions led to desegregation across the United States, but the current inequalities in the American education system remind us that we cannot take past successes for granted.

Méndez made her career as a registered nurse and now devotes her time to traveling and lecturing on the historic contribution she and her parents made to civil rights in the U.S.