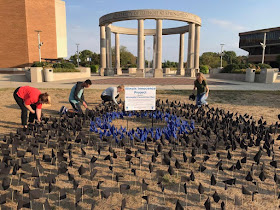 WHAT: The Illinois Innocence Project (IIP), based at the University of Illinois Springfield, will host one of dozens of events throughout the world recognizing International Wrongful Conviction Day. The public is invited to a visual display recognizing individuals who were wrongly convicted and imprisoned for crimes they did not commit.

WHERE: UIS Quad – between the Colonnade and the Student Union

DETAILS: UIS students interning and volunteering with the Illinois Innocence Project have created a flag display recognizing the 2,098 innocent men and women who were convicted of crimes they did not commit and have been exonerated since 1989. “UIS blue” flags in the display represent 199 Illinois exonerees.

International Wrongful Conviction Day began four years ago with the Association in Defense of the Wrongly Convicted. The day is designed to recognize the tremendous personal, social and legal costs associated with wrongful criminal convictions. To date, seven nations participate with events designed to inform and educate the international community on the causes, consequences and complications associated with wrongful criminal convictions.