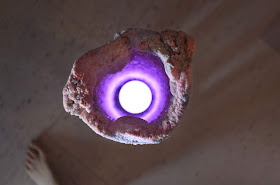 The University of Illinois Springfield Visual Arts Gallery is pleased to present “digital dusk shadow storage,” an installation by St. Louis-based artist Amanda Bowles. The exhibition will open on Monday, August 27, and run through Thursday, September 20. A reception for the exhibit will take place on Thursday, September 6, from 5:30 to 8 p.m.

The artist describes the exhibit as “pink air, light refracting, iClouds float in a Midwestern sky. Civil twilight culminates in civil dusk; nautical twilight begins. A backdrop for an imperfect cinema, where horizons float on the surface of infinite data pools and time collects like condensation on cave walls.”

Bowles is an interdisciplinary artist whose work experiments with temporalities, utilizing material-specific processes to express a yearning for deep-time in the age of no-time. Employing mundane rituals, she constructs artifacts that visualize duration - loosely coalescent aggregates in video, installation, performance and text.

Interested in the ways relationships between self and others are evolving, as temporal experience is reframed by digital technologies and publics are rearranged into networks – Bowles works between the on and offline. Her practice demarcates the studio as a site for transformation and transmission, production and performance.

Bowles received her bachelors of fine arts from the Kansas City Art Institute and her masters of fine arts in art theory and practice from Northwestern University. She was born in Alexandria, Virginia.

For more information, visit the UIS Visual Arts Gallery website at www.uis.edu/visualarts/gallery or contact the gallery by phone at 217/206-6506 or by email at alach@uis.edu.
Blake Wood at 9:50 AM
Share