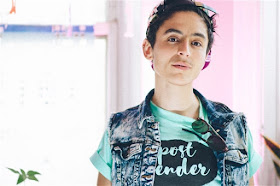 WHAT: The University of Illinois Springfield Engaged Citizenship Common Experience (ECCE) Speaker Series presents “Intersex: Stories Not Surgeries” featuring speaker Pidgeon Pagonis, an intersex activist, educator and filmmaker from Chicago. The talk is free and open to the public.

DETAILS: The speaker will discuss how, for over a century, intersex people have had no voice in their medical “care” and “treatment”, which has led to dire consequences. Key events throughout intersex history will be introduced to help participants understand why intersex activists across the globe have united to demand intersex bodily autonomy and justice.

Pidgeon has a decade’s worth of experience giving talks and facilitating intersex workshops around the globe. In 2016, Pagonis was featured on the cover of National Geographic’s January issue titled “Gender Revolution.” Pagonis has launched an intersex-resource YouTube channel, co-founded the group Intersex People of Color for Justice (IPOCJ), introduced an intersex and non-binary art and clothing line and also made a cameo on Amazon’s “Transparent”. Pagonis was among nine LGBTQ artists honored with a Champion of Change Award in 2015 from the Obama White House.

This event is co-sponsored by the UIS Diversity Center, Gender and Sexuality Student Services, Women's Center, Women & Gender Studies, Department of Sociology/Anthropology and the University of Illinois at Chicago College of Nursing - Springfield Regional Campus.

Individuals with disabilities who anticipate the need for accommodations should contact the UIS Speaker Series Office at 217/206-8507 or speakerseries@uis.edu in advance. For a list of other upcoming ECCE Speaker Series events, visit www.uis.edu/speakerseries/.
Blake Wood at 10:49 AM
Share