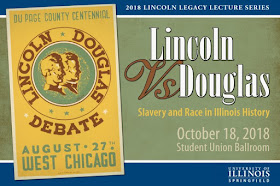 The 16th annual Lincoln Legacy Lectures presented by the University of Illinois Springfield Center for Lincoln Studies will be held from 7 to 9 p.m. on Thursday, Oct. 18, 2018, in the Student Union Ballroom at UIS.

This year’s topic is “Lincoln versus Douglas.” The lectures, and a reception and book signing that will immediately follow, are free and open to the public. No reservation is required. Doors will open at 6 p.m.

This year’s featured speakers are Graham Peck, professor of history at Saint Xavier University, and Roger Bridges, former head of the Lincoln Legal Papers. Michael Burlingame, the Chancellor Naomi B. Lynn Distinguished Chair in Lincoln Studies at UIS, will give opening remarks on “Lincoln and African Americans” and serve as moderator.

In the first lecture, Peck will describe “Why Did Slavery Matter in Illinois? Lincoln, Douglas, and the Nation’s Battle over Freedom.” In the second lecture, Bridges will explore “Race Relations in Lincoln’s Illinois.” The speakers will discuss the contemporary implications of their lectures at the beginning of the Q & A session.

Peck is the author of a prize-winning book “Making an Antislavery Nation: Lincoln, Douglas, and the Battle Over Freedom” (University of Illinois Press, 2017). Bridges co-edited the book “Illinois: Its History and Legacy” (River City, St. Louis, 1984). Burlingame is the author of the two-volume biography “Abraham Lincoln: A Life” (Johns Hopkins University Press, paper, 2012).