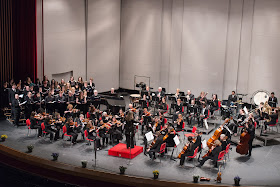 WHAT: The University of Illinois Springfield Music Program presents its Fall Showcase Concert featuring performances by the UIS Orchestra, UIS Chorus and UIS Band. The performance is free and open to the public.

WHERE: Sangamon Auditorium at UIS

DETAILS: The UIS Orchestra, under the direction of Adjunct Professor Christopher Raymond, will open the program with Leroy Anderson’s “The Waltzing Cat” followed by the world premiere of Ralph Lewis’ “Pioneer’s Rest.” The UIS Chorus will join the orchestra for Faure’s “Pavane Op. 50” and the orchestra will finish with the opening movement of Franz Schubert’s “Unfinished Symphony.”

The UIS Band will close the program, under the direction of Applied Music Specialist Abigail Walsh, with works including “Symphonic Suite from Harry Potter and the Goblet of Fire” by Patrick Doyle and “A Childhood Remembered” by Rossano Galante.