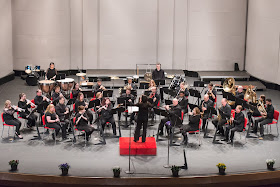 DETAILS: Come join the UIS music ensembles for a dramatic musical and visual multimedia experience featuring music from Harry Potter, Jurassic Park, Hansel and Gretel and more! A night of magical music will be enhanced by storytelling, still and animated visual representations and lighting effects.

This concert marks the premiere of the UIS Jazz Ensemble under the direction of Adjunct Professor Robert Sears. The group will open with “Queen Bee” by Count Basie and arranged by Sammy Nestico. Other works include pieces by Duke Ellington, Pat Metheny and Jaco Pastorius. Also included in the first half is a medley of folkloric songs from Mexico performed by the UIS Flute Choir and an arrangement of “Queen of the Night” from Mozart’s “The Magic Flute” performed by a brass ensemble consisting of Camerata scholarship students.

Under the direction of Applied Music Specialist, Abigail Walsh, the UIS Band will open the second half of the concert with Rossano Galante’s “A Childhood Remembered” followed by music from Harry Potter, Berlioz’s “March Hongroise” and Mortin Lauridson’s “O Magnum Mysterium.”

Donations are welcome and will be used to benefit the UIS Music Student Merit Award. The UIS Music Program began in 2001 and is comprised of students, faculty, staff and alumni, as well as Springfield community members, all with a variety of skill levels.

Anyone who is interested in joining the UIS Chorus, Band, Jazz Ensemble or Orchestra may contact Abigail Walsh at 217/206-7549 or music@uis.edu.
Blake Wood at 1:39 PM
Share