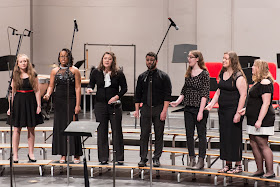 WHAT: The University of Illinois Springfield Music Program presents a Spring Recital featuring performances by the UIS Flute Choir, UIS Chorus, Camerata student musicians, UIS music faculty and honorable mention recipients of the UIS Music Soloist Competition. The performance is free and open to the public.

WHERE: UIS TV Studio – Office of Electronic Media, located in the Public Affairs Center at UIS

Donations are welcome and will be used to benefit the UIS Music Student Merit Award. The UIS Music program began in 2001 and is comprised of students, faculty, staff and alumni, as well as Springfield community members, all with a variety of skill levels.
Blake Wood at 3:43 PM
Share