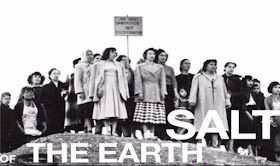 WHAT: The University of Illinois Springfield Engaged Citizenship Common Experience (ECCE) Speaker Series will screen and discuss the historically blacklisted film “Salt of the Earth.” The film presents the true story of Mexican-American zinc miners who strike to end unsafe work conditions and unequal wages with their white counterparts. This film and discussion are free and open to the public.

DETAILS: “Salt of the Earth” explores themes regarding the role of organized labor, what it means to be American, race and feminism. The film stands out in history as a blacklisted film, swept up in the communist panic of the McCarthy era, but has stood the test of time to give a unique perspective of the American Southwest in the 1950s.

Individuals with disabilities who anticipate the need for accommodations should contact the UIS Speaker Series Office at 217-206-6245 or speakerseries@uis.edu in advance. For a list of other upcoming ECCE Speaker Series events, visit uis.edu/speakerseries/.
Blake Wood at 2:03 PM
Share