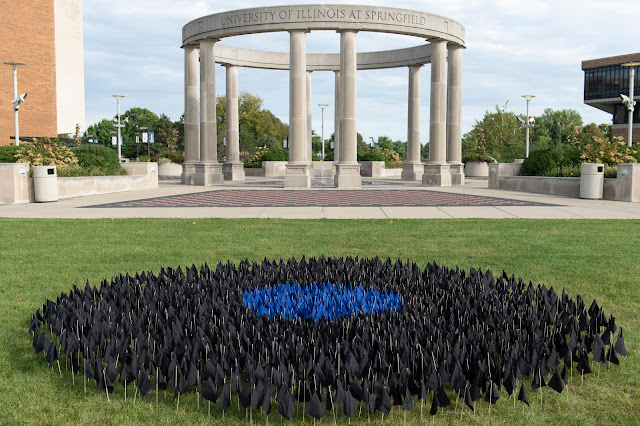 WHAT: The University of Illinois Springfield’s Illinois Innocence Project (IIP) will hold three events marking International Wrongful Conviction Day. UIS students working with IIP will create a visual display on the UIS quad featuring 2,662 flags representing innocent people who have been exonerated since 1989. IIP staff will also speak at two virtual events in the evening.

The IIP invites members of the community to participate in Wrongful Conviction Day on campus, virtually and on social media.

During the livestream event, titled “A Pound of Flesh – What the State Took from Jerry Herrington,” IIP Chicago Legal Director Lauren Kaeseberg will speak with client Jerry Herrington who, from age 16 through 45, served – and completed – a prison sentence for a murder he did not commit. Herrington was released in June 2020.

Kaeseberg and Herrington will give an inside look at growing up in prison, the fight to prove his innocence, the collateral damage to his family, his unique perspective on our country's long-overdue reckoning with racial and criminal justice, and his thoughts about the ongoing violence in his home city of Chicago.

IIP Executive Director John Hanlon will present on how the Project and other innocence organizations across the nation have used forensic science to exonerate the innocent as part of the Saint Louis Science Center’s “First Friday From Home: Mystery Night” livestream event. The event itself will focus on true crimes and mysteries.

The Innocence Network is an affiliation of 68 organizations worldwide dedicated to providing pro-bono legal and investigative services to individuals seeking to prove innocence of crimes for which they have been convicted, working to redress the causes of wrongful convictions and supporting the exonerated after they are freed.

The Project has played a significant role in the exoneration/release of 17 innocent women and men (five since the Illinois coronavirus shutdown in March 2020) who were wrongfully convicted of crimes they did not commit and wrongfully imprisoned for a collective 350 years at a cost of $15.7 million for incarceration alone.