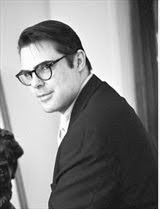 WHAT: Author James L. Swanson will speak about his new book Bloody Crimes: The Chase for Jefferson Davis and the Death Pageant for Lincoln 's Corpse. The discussion will be hosted by Dr. Michael Burlingame, Chancellor Naomi B. Lynn Distinguished Chair in Lincoln Studies at UIS.

DETAILS: In Bloody Crimes, James L. Swanson the Edgar Award-winning, New York Times bestselling author of Manhunt - brings to life two epic events of the Civil War era: the thrilling chase to apprehend Confederate president Jefferson Davis in the wake of the Lincoln assassination and the momentous 20 -day funeral that took Abraham Lincoln’s body home to Springfield. A true tale full of fascinating twists and turns, and lavishly illustrated with dozens of rare historical images - some never before seen - Bloody Crimes is a fascinating companion to Swanson’s Manhunt and a riveting true-crime thriller that will electrify civil war buffs, general readers, and everyone in between.

Swanson has degrees in history from the University of Chicago, where he was a student of John Hope Franklin, and law from the University of California, Los Angeles. He has held a number of government and think-tank posts in Washington, D.C., including at the United States Department of Justice. He serves on the advisory council of the Ford’s Theatre Society.

His other books include the acclaimed photographic history Lincoln’s Assassins: Their Trial and Execution, as well as Chasing Lincoln’s Killer. James L. Swanson was born on Lincoln’s birthday.

For more information contact Dr. Michael Burlingame at mburl2@uis.edu. This event is free and open to the public.
Blake Wood at 10:57 AM
Share