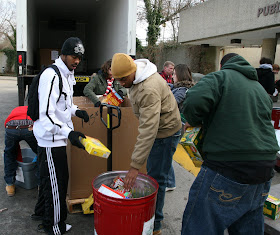 The University of Illinois Springfield collected a record 9,612 pounds of food for the Central Illinois Foodbank as part of the 2010 Holiday Stars Project. That’s an increase from the 6,209 pounds collected last year.

Student, staff, and faculty volunteers gathered to hear the announcement of the final total during a celebration in the Public Affairs Center on Friday, December 3. The volunteers helped load a truck with the canned goods collected following the celebration. 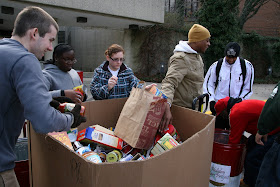 UIS Chancellor Harry Berman thanked the volunteers for their efforts and dedication to service. He said the project shows the community that UIS cares.

In addition to collecting food on campus throughout the month of November, students also involve the community through the Trick-or-Treat for Canned Goods competition. On Halloween night, seventeen student groups from UIS collected a record 8,354 pounds of food.

The UIS Holiday Stars Project, a campus-wide service initiative giving focus to UIS’ efforts to make a difference in the local community during the holiday season was started in 2008. The month-long food drive benefits foodbank clients in 21 central Illinois counties.