Earth Day speaker aims to end the "Age of Waste" 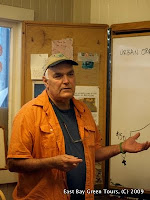 WHAT: The University of Illinois Springfield is proud to welcome Dan Knapp, founder of the company Urban Ore and former Sangamon State University (now UIS) professor as the 2011 Earth Day speaker.

WHERE: Brookens Auditorium, located on the lower level of Brookens Library, with overflow seating available in conference rooms PAC C/D. A free public reception will follow the event in the PAC restaurant.

DETAILS: Knapp’s company, Urban Ore, has a unique business model that involves salvaging items from the dump for reuse, selling the merchandise in retail sales, and recycling as a last resort.

Today, sprawling across three acres in Berkeley, California, Urban Ore is a huge thrift store that sells about 7,000 tons of reused and recycled goods per year. Dan and his wife, Mary Lou Van Deventer, pride themselves on only sending 120 tons — 2 percent of their inventory — to the landfill annually.

Knapp received a Ph.D. in Sociology from the University of Oregon, before coming to teach at Sangamon State University in the early 1970s. Dan taught a course at SSU called ―20th-Century Homesteading. For this course his students scavenged in alleys and redistributed the goods they found. This persuaded Dan that recycling could provide ―enough high-value stuff to support a substantial small business.

When Knapp moved back to Oregon he faced opposition to his plans for starting a recycling business. In September 1979 he hitchhiked to Berkeley and began working on landfills four days later. The following year, Urban Ore was founded.

Urban Ore is based on environmentally sustainable disposal by reuse and recycling and zero waste design. The company has developed methods that are being adapted in the United Stated, Australia and New Zealand.