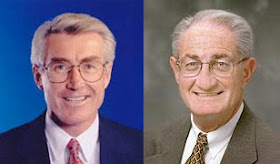 WHAT: Former Illinois Governor Jim Edgar and political commentator Mike Lawrence will discuss “The American People, the Government, and the Public Trust” as part of the UIS Lunch and Learn Series.

WHERE: Public Affairs Center (PAC) Conference Rooms C/D, located on the lower level of the PAC on the UIS campus.

DETAILS: Former UIS Chancellor and political scientist Dr. Naomi B. Lynn will moderate the event sponsored by the UIS Alumni SAGE Society, the Illinois State Historical Society and the Office of UIS Chancellor.

Governor Edgar, a distinguished fellow with the University of Illinois Institute of Government and Public Affairs, was the 38th governor of Illinois. As governor, he made fiscal discipline and children the cornerstones of his two terms.

Mike Lawrence recently retired as Director of the Paul Simon Institute for Public Policy at Southern Illinois University at Carbondale. He is a well-known political commentator, syndicated columnist and blogger.