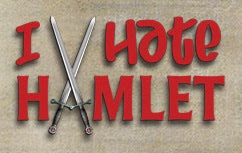 The Theatre Program at the University of Illinois Springfield will hold open auditions for the first production of its 2011-2012 season – Paul Rudnick’s I Hate Hamlet - on Sunday, August 28 and Monday, August 29 beginning at 7 p.m. both nights in the Studio Theatre, located on level one of the Public Affairs Center on the UIS campus. Call-backs will be at 7 p.m. on Tuesday, August 30.

Auditions are open to anyone, with or without experience. Auditions will consist of “cold readings” from the script; prepared monologues are welcome, but not mandatory. Resumes are appreciated, but are not required. Scripts will be available for check-out soon at Brookens Library. Those interested in working on a crew (running crew, costumes, props, stage management) will be asked to fill out a crew application form, and meet briefly beginning at 6 p.m. on August 28 or 29 in the Studio Theatre.

I Hate Hamlet follows “a young and successful television actor, who relocates to New York, where he rents a marvelous, gothic apartment. With his television career in limbo, the actor is offered the opportunity to play Hamlet onstage, but there's one problem: He hates Hamlet. His dilemma deepens with the entrance of John Barrymore's ghost, who arrives intoxicated and in full costume to the apartment that once was his. The contrast between the two actors, the towering, dissipated Barrymore whose Hamlet was the greatest of his time, and Andrew Rally, hot young television star, leads to a wildly funny duel over women, art, success, duty, television, and yes, the apartment.” –Dramatists Play Service

UIS Associate Professor of Theatre Eric Thibodeaux-Thompson will direct. Production dates are Oct. 28-30 and Nov. 3-5, 2011. The curtain time for Thursday, Friday and Saturday night shows is 7:30 p.m. with the Sunday performance starting at 2 p.m. Ticket prices are $12 for adults, $10 for senior citizens (65 or older with a picture I.D.), $8 for UIS Faculty/Staff and $6 for UIS students with a valid i-card. Please note that a $2 service charge, not included in the prices above, from Sangamon Auditorium will be added to each ticket price, at the time of purchase, for those who walk up to the UIS Ticket Office to buy their tickets. For those who buy over the phone with a credit card or buy online, an additional $3 is added (for a total of $5 as a service charge per ticket).

For more information about auditions, the play, or helping behind the scenes, contact Eric Thibodeaux-Thompson at 217/206-6613 or ethib1@uis.edu. You may also visit the Theatre Program’s website at www.uis.edu/theatre.
Blake Wood at 10:13 AM
Share