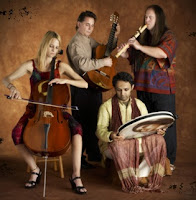 WHAT: The University of Illinois Springfield Diversity Center will host a performance by the instrumental music group Autumn’s Child. The group will play a mix of folk, jazz, classical and world music.

DETAILS: Autumn’s Child promises to take you on "a soul's journey filled with wonder and grace and an abundance of groove." Now in its 16th year, the St. Louis based group was founded by Mark Holland in 1995. He is known for his amazing performance on the Native American style flute. Other members of the group include Tracy Andreotti, Billy Engel and Ali Soltanshahi. The group has recorded 16 albums, the most recent being “Balanced”, which was released in October 2010.

Holland uses a musical approach he calls “global Chamber Music”. “In addition to plenty of original material by Holland and the band, you'll also hear everything from reinterpretations of songs by the likes of the Moody Blues as well as a version of Jim Pepper's ‘Witch-Tai-To,’ a jazz composition based on an American Indian chant.” – St. Louis Beacon

The performance is FREE and open to the public. For more information on the group, visit www.autumnschild.com.

Questions about the performance can be directed to Jeannie Capranica, Diversity Center program manager at 217/206-6584 or by email at jjone1@uis.edu.
Blake Wood at 3:48 PM
Share