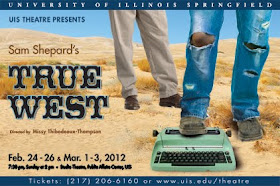 The Theatre Program at the University of Illinois Springfield will hold open auditions and crew interviews for the second production of its 2011-2012 season – Sam Shepard’s True West - on Thurs., Dec. 1 and Fri., Dec. 2 in the Visual and Performing Arts Building (VPA) Room 170, located the east side of the UIS campus. Parking is available in Lot A. Crew interviews begin at 6 p.m. on both nights; auditions begin at 7 p.m. on both nights.

Auditions will consist of “cold readings” from the script; prepared monologues are welcome, but not mandatory. Resumes are appreciated, but are not required. Scripts are available for check-out at Brookens Library. The three available roles are Austin (an aspiring screenwriter), Saul (a Hollywood producer), and Lee & Austin’s mother. In this "Faculty Showcase" production, the role of Lee will be played by Associate Professor of Theatre, Eric Thibodeaux-Thompson.

Those interested in working on the production team (props, costumes, dramaturgy, running crew, sound or light board operator, assistant stage manager, etc.) will be asked to fill out a crew application form and meet briefly with the director.

True West explores the challenging and volatile relationship between brothers Austin and Lee, an unsavory drifter. Austin's attempt at creating his own screenplay to pitch to a Hollywood producer gets undermined by Lee's conman tactics, and the two brothers find themselves in a battle of wills with high stakes.

UIS Assistant Professor of Theatre Missy Thibodeaux-Thompson will direct. Production dates are Feb. 24-26 and March 1-3, 2012. The curtain time for Thursday, Friday and Saturday night shows is 7:30 p.m. with the Sunday performance starting at 2 p.m. Ticket prices are $12 for adults, $10 for senior citizens (65 or older with a picture I.D.), $8 for UIS Faculty/Staff and $6 for UIS students with a valid i-card. Please note that a $2 service charge, not included in the prices above, from Sangamon Auditorium will be added to each ticket price, at the time of purchase, for those who walk up to the UIS Ticket Office to buy their tickets. For those who buy over the phone with a credit card or buy online, an additional $3 is added (for a total of $5 as a service charge per ticket).

For more information about auditions, the play, or helping behind the scenes, contact Missy Thibodeaux-Thompson at 217/206-8307 or mthom1@uis.edu. You may also visit the Theatre Program’s website at www.uis.edu/theatre.
Blake Wood at 11:30 AM
Share