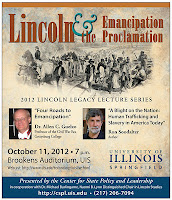 The 10th Annual Lincoln Legacy Lectures presented by the University of Illinois Springfield will be held from 7 to 9 p.m. Thursday, October 11, 2012 in Brookens Auditorium, located on the lower level of Brookens Library at UIS.

This year’s topic is “Lincoln and the Emancipation Proclamation.” The lectures, and a reception and book signing that will immediately follow, are free and open to the public. No reservation is required.

The Lincoln Legacy Lecture Series brings nationally known scholars to Springfield to discuss issues that are of contemporary interest and also engaged Abraham Lincoln and citizens of his era.

Guelzo’s lecture will discuss Lincoln’s decision making in “Four Roads to Emancipation.” Soodalter will describe “A Blight on the Nation: Human Trafficking and Slavery in America Today.”

Guelzo is one of America’s foremost Lincoln scholars and author of many books on Lincoln and the Civil War, including Lincoln’s Emancipation Proclamation: The End of Slavery in America (Simon & Schuster, 2004) and Fateful Lightning: A New History of the Civil War and Reconstruction (Oxford University Press, 2012).

Soodalter is the author of The Slave Next Door: Human Trafficking and Slavery in America Today (with K. Bales, University of California Press, 2010) and Hanging Captain Gordon: The Life and Trial of an American Slave Trader (Atria, 2006).