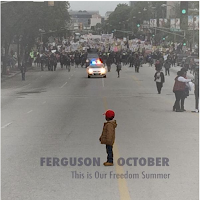 On the frontlines of the Ferguson protests, Bush reports being assaulted by police as she provided medical care to protestors. Sekou was arrested as he prayed with other clergy who had gathered. Bush and Sekou contend that only nonviolent citizen-led civil rights actions against social, political, and law enforcement practices that have shaped and sustained patterns of deep racial injustice in Ferguson can achieve the change that justice demands.

Bush is the pastor of Kingdom Embassy International, a member of Ferguson’s Women’s Caucus, a registered nurse and a daily Ferguson activist. Sekou, called to Ferguson by the interfaith peace Fellowship of Reconciliation, is a Harvard-educated theologian, author and former visiting scholar at Stanford University’s Martin Luther King Education and Research Institute.

This lecture-discussion is part of the events leading up to the One Book, One UIS Keynote event with Congressman John Lewis on Oct. 19.

A list of other upcoming ECCE Speaker Series events can be found at www.uis.edu/speakerseries/. All events are free and open to the public.
Blake Wood at 3:48 PM
Share