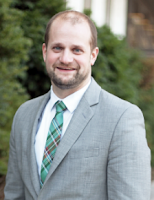 DETAILS: Simpson will speak on his role working on a legislation to address and reduce violence against women and end college sexual violence. He will also discuss the history of such legislation in the United States. He will relate his work on violence against women issues to how his education from UIS paved the way for providing himself with the knowledge and experience that led him to his work on Capitol Hill.

Simpson is a 2007 graduate of the UIS Capital Scholars Honors Program. After serving Congressman Phil Hare, he continued to work in politics, for Illinois Congressman Bill Foster and U.S. Senator Claire McCaskill. His experiences, both from his UIS education and his work on Capitol Hill have brought him close to both national issues and local concerns.

For a list of other upcoming ECCE Speaker Series events and more information, visit www.uis.edu/speakerseries/. All events are free and open to the public.
Blake Wood at 10:14 AM
Share