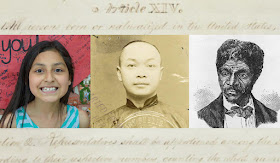 DETAILS: The film explores the recurring question about who has the right to be an American citizen and examines the citizenship clause of the 14th Amendment. The story is told through the lives of three ordinary and extraordinary American families who courageously challenged the powerful status quo. Descendants of Dred and Harriet Scott and Wong Kim Ark tell the stories of how their ancestors fought all the way to the Supreme Court and changed American History. Rosario Lopez and her daughter Vanessa are both activists in the immigrants' rights youth movement. It is the citizenship of millions of children like Vanessa Lopez, born in the United States to undocumented parents that is at stake now.

Galisky is co-founder of Graham Street Productions, which produced the documentary. Galisky also directed the feature-length documentary film, “Papers: Stories of Undocumented Youth”. She founded and operated Small World Builders, a building construction company, for fifteen years before directing films. She earned a master’s degree in history with her research on the Japanese Internment, included in the Internment Memorial at the Expo Center in Portland, Oregon.

This event is co-sponsored by the UIS Diversity Center, Gamma Phi Omega Sorority, Inc., the UIS Organization of Latin American Students and UIS Brookens Library. For a list of other upcoming ECCE Speaker Series events and more information, visit www.uis.edu/speakerseries/. All events are free and open to the public.
Blake Wood at 1:05 PM
Share