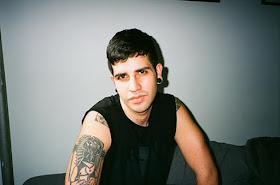 WHAT: The University of Illinois Springfield Engaged Citizenship Common Experience (ECCE) Speaker Series presents a discussion on “Queer Poets of Color: Undocupoets and Migrant Literary Activism.” The presentation will be led by Christopher Soto, a poet based in Brooklyn, New York. The event is part of the national LGBTQ Day of Silence observed on campus.

DETAILS: Soto will discuss queer of color poetry from the Harlem Renaissance to the age of mass incarceration with an emphasis on undocumented literary activism. During this event, students will explore the intersections of queer identities and poetry with activism as it relates to undocumented youth.

Soto is the author of “Sad Girl Poems” (Sibling Rivalry Press, 2016) and the editor of “Nepantla: An Anthology Dedicated to Queer Poets of Color” (Nightboat Books, 2018). He cofounded the Undocupoets Campaign and worked with Amazon Literary Partnerships to establish grants for undocumented writers. In 2017, he was awarded The Freedom Plow Award for Poetry & Activism by Split This Rock and he was invited to teach a Poetry and Protest Movements course at Columbia University, as part of the June Jordan Teaching Corp. He is currently working on a full-length poetry manuscript about police violence and mass incarceration. He received his master of fine arts in poetry from New York University (NYU).

This event is cosponsored by the UIS Office of Gender and Sexuality Student Services, the UIS Diversity Center, the UIS Women’s Center and the Organization of Latin American Students.

Individuals with disabilities who anticipate the need for accommodations should contact the UIS Speaker Series Office at 217/206-8507 or speakerseries@uis.edu in advance. For a list of other upcoming ECCE Speaker Series events, visit www.uis.edu/speakerseries/.
Blake Wood at 1:50 PM
Share